How to benchmark Video Analytics and evaluate video analytics performance?

This article describes how to benchmark and differentiate video analytics solutions.

1 How to measure video analytics performance?

In this section, the main criteria for video analytics evaluation are presented.

1.1 Robustness
Robustness can be determined by counting the following three cases:

Both false alarms as well as missed alarms have to be considered in the evaluation of robustness.

In case of intrusion detection, false alerts are very time consuming and annoying and should therefore be minimized as much as possible. If too many false alerts occur, then operators have been known to shut down the video analytics system completely, as they were otherwise no longer able to fulfil their monitoring tasks. Any missed alarms, on the other hand, mean the video analytics did not fulfil their task at all and intruders could enter the premises unhindered. The ratio of true alarms to false alarms is typically very unbalanced. While a single intruder in three month is already much, video analytics can easily generate a multitude of alarms per day.

1.3 Features
Typical and useful features for intrusion detection are

Beyond that, other features include

1.4 Scenarios
In addition to comparing configuration options, it should also be investigated whether the video analytics can cope with different scenarios like

Many video analytics have severe troubles when several objects are close to each other, and are not able to separate these objects. Thus, any evaluation of the number of objects (counting, queuing) or paths (loitering) cannot work. Usage of top-down camera views to minimize the occlusions is advisable, but cannot solve the task completely. Some video analytics assume that only people are within an area and are thus able to separate them using knowledge about the perspective in the scene. However, any shopping cart or car will then be detected as a multitude of people as well, so this is only applicable in people-only areas.

Another very challenging and often not supported area of scenarios is given by moving backgrounds like water / waves, elevators, conveyor belts and doors.

Ease of use is related to both robustness and the amount of features. The more robust a system is, the less it needs to be configured to achieve satisfactory results. The more features a system has, the more configuration options are available which might make the system seem more complex at first glance.
Typical measures to determine the ease of use are 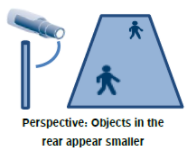 It is advisable to verify that the calibration is correct independent of the method used. All methods can achieve the same accuracy levels if used expertly.

Video analytics typically run 24/7 in all weather and lighting conditions, in a multitude of different setups concerning perspective, background and complexity of the scene. It is impossible to test all of them in a benchmark setup, but effort should be taken nonetheless to provide as wide a variety as possible and necessary for the video analytics task to be benchmarked.