How to use the VCA Task Script Language?

This articles gives a short introduction to scripting alarm and counter tasks with Intelligent and Essential Video Analytics in FW 7.60. It also provides a broad selection of example scripts for explanation as well as including real world application examples.

1 What is the VCA task script language?

1.1 When to use the VCA task scripts?

(1) Define all tasks via task wizards as far as possible.
(2) Change to the VCA task script editor. The already defined tasks can be found there with all details.
(3) Make your modifications.
(4) Change the defined tasks into task type scripted so accidental use of the task wizards will not overwrite your changes.

Right-click on the video and select Advanced -> VCA Task Editor. A separate popup with the current VCA task script will appear: 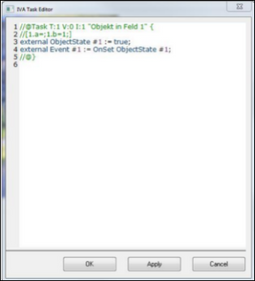 A task consists of

Note that not all tasks and filters are available in every FW version. 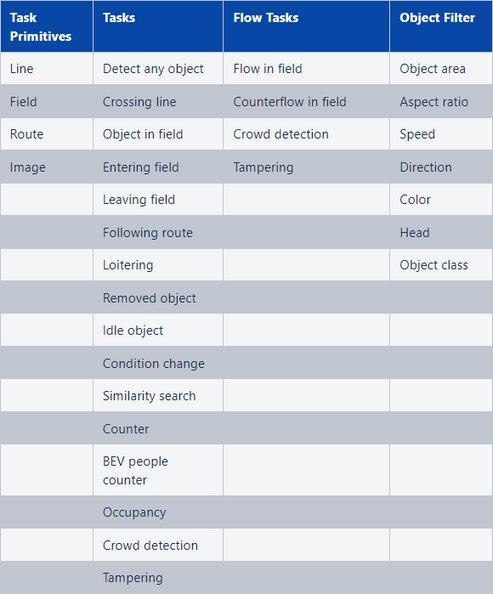 From the task primitives, the tasks and the object filter as defined in the GUI via the task wizards, target object states and events are derived. These can also be defined directly in the VCA task script language.

States can be, amongst others, spatial relations, object properties, tamper states, counter values

Simple states are used whenever a property has no corresponding objects. Examples are Motion+, Flow, counter values and tamper states. 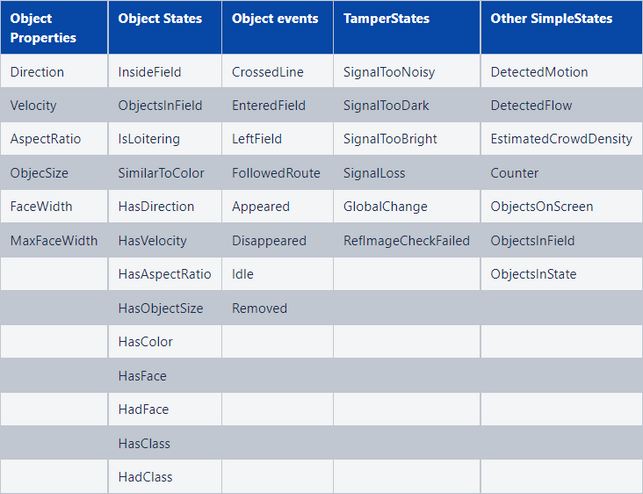 The combinations of object states and events listed below are possible. Object states can be also converted into events, but only the onset or leaving of an object state is an actual event, not the actual duration of the object in this state.

Starting with FW 6.60 and in order to create temporary states triggered by an event, the keyword within can used after an event. This can be used to

- delay or debounce an alarm based on an object state: within(0,)

- to extend an alarm state similarly to the aggregation time: within(,*)

- debouncing object properties: By checking the target values is currently met, and has not changed during the debounce time

- temporarily combine an event with other states

There are two different ways to describe the position information of lines, fields and routes:

Here, the coordinates are defined within the specified resolution and transferred automatically to the real resolution used in the video analytics.

2.6 Example: Alarm if object enters a field and afterwards crosses the line

2.7 Example: Alarm if object enters first one field and then the other

2.13 Example: Alarm when object enters an area at least 4 times

2.14 Example: Alarm when a second object crosses a line within 3 seconds of the first

2.15 Example: Alarm when at least 2 object are in an area

2.16 Example: Count the number of objects in an area

2.18 Example: Alarm if one queue is empty and the other has at least 3 persons

2.19 Example: Virtual room for counting with one in and one out line

2.20 Example: Virtual room for counting with two in and one out line

2.21 Example: Alarm on any object that is not yellow

2.24 Example: Give 30 sec alarm on any object (aggregation time)