Applications:
- Detect camera blinding
- Detect camera being moved away from of its view
- Detect the loss of sufficient overall illumination
- Detect idle / removed objects, e.g. objects in front of an emergency exit

Limitations:
- Not available on thermal cameras 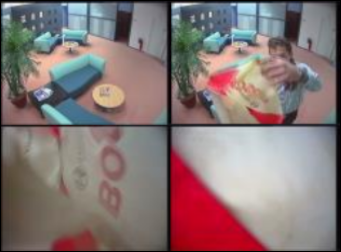 How it works: Scene too dark / bright evaluates the amount of incoming light at the sensor and generates a corresponding brightness level with values between 0 and 255. This is then compared to a user-configured threshold. The check is run every 10 seconds and needs to be true twice to alarm, thus the alarm is generated only if and after the event occurs for at least 20-29 seconds. The current brightness level is shown to aid in setting the threshold.

Limitations:
- The computed brightness value depends on the chosen camera / lens combination. Therefore the threshold may need to be adapted for every camera combination as well.
- Not all cases of camera blinding can be detected with scene too dark / too bright. Even with covering the camera, the
brightness at the sensor may still be quite high, and the brightness of artificial lights like torchlights is less than a very bright sunny day. Use reference image check to detect camera blinding instead.
- Available since FW 6.30. (Prior to FW 6.30, the average brightness of the final image pixel was evaluated, however, as can be seen in the example below, current camera image quality is good enough to generate a properly bright image even from very dark or very blinded scenes, so the old alarming method was not reliable anymore)

Some camera blinding situations and their corresponding brightness values. When the material covering the camera is not fully opaque or fully covering, brightness levels can be quite high. Torchlights and laser pointer were held very close to the camera to archive highest brightness possible, otherwise brightness values will be even lower.

2. Global change
Application: Significant but short-term changes in the image

Limitations:
- The alarm can also be set off by:

o Crowds of people walking through.

Applications:
- Detect camera blinding
- Detect camera being moved away from of its view
- Detect the loss of sufficient overall illumination
- Detect idle / removed objects, e.g. objects in front of an emergency exit

How it works:
- A fixed reference image needs to be set. This reference image is then compared to the current image every 10 sec.
For independence to illumination changes, only the edges in both images are evaluated. The evaluation can and should be restricted to significant and stable edges like those from buildings in the image via masking all other areas.
As long as these edges are visible, then the field of view is unobstructed, the illumination level good enough, and the camera still on the desired field of view. To avoid false alerts due to short-term changes, both timer and sensitivity can be adapted.
- To use the reference check for removed object detection, e.g. a painting on the wall: Restrict the evaluation to the object plus a small border around it. Adapt the sensitivity until every removal of the object raises the alarm.
- To use the reference check for idle object detection, e.g. a box before an emergency exit, target the camera view on the floor or restrict the evaluation accordingly. Now select “appearing edges” for the “edge check”, and adapt the sensitivity until the camera alarms on your test objects.
- The alarm will consist until the scene is again similar enough to the reference image
- Performance may be improved by scheduling two different reference image check profiles for day and night.

Limitations:
- It cannot be distinguished which kind of camera tampering occurred

A scene changing over day, night, and seasons 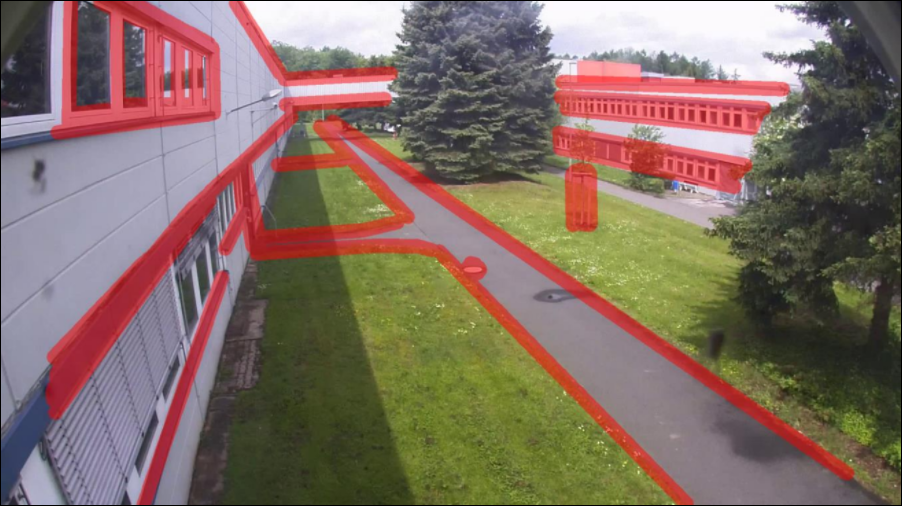 The reference check for tamper detection should be focused on edges that are always visible (marked in red) to obtain best performance.

Using the reference check for removed object detection: Focusing the camera view on the object to be secured, setting the reference including this object, setting check to “Disappearing edges”. When the object is removed, the alarm will sound. Here with very short trigger delay for testing purposes only to immediately get the alarm state, increase trigger time for more robustness in practice.