This article describes how to configure a generic Microsoft Windows Server (2012 R2, 2016 or 2019) based server to serve as an iSCSI target for a Bosch video surveillance environment.

SCSI (Small Computer System Interface) is most commonly used for the communication between computers and peripheral devices, such as hard drives.

iSCSI enables devices to use SCSI over a network interface, therefore it makes a lot of sense for cameras to use iSCSI to record video.

The camera is a small computer that needs a (network) connection to a "hard drive" to store video footage. In other systems this job is performed by the network video recorder (NVR).

Image: Network Video Recorder versus Bosch iSCSI based storage. The Storage Area Network (SAN) could also be iSCSI based.

Microsoft iSCSI Target
The Microsoft iSCSI target is part of all Windows Server editions. It will pick-up the iSCSI traffic coming from the camera and will write it the storage device. This storage device can be connected to a storage area network, but can also reside within the same system as local hard drives.

Check if the Role "File and Storage Service iSCSI Target Server" is installed. Start the "Server Manager". This will start the "Add Roles and Features Wizard". Click "Next". 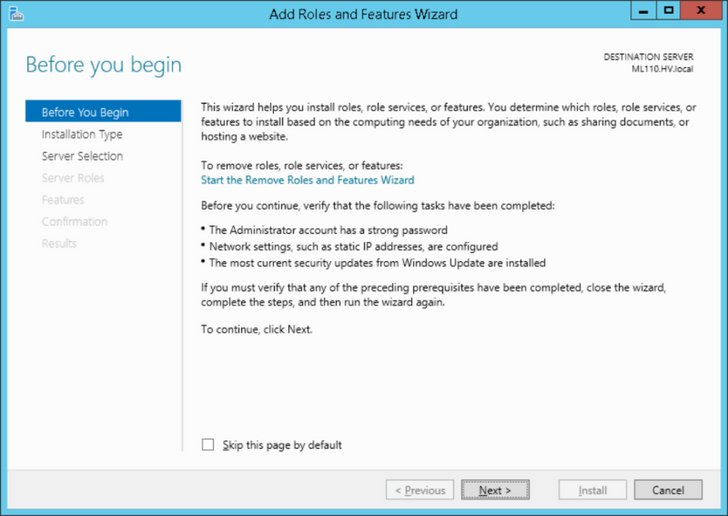 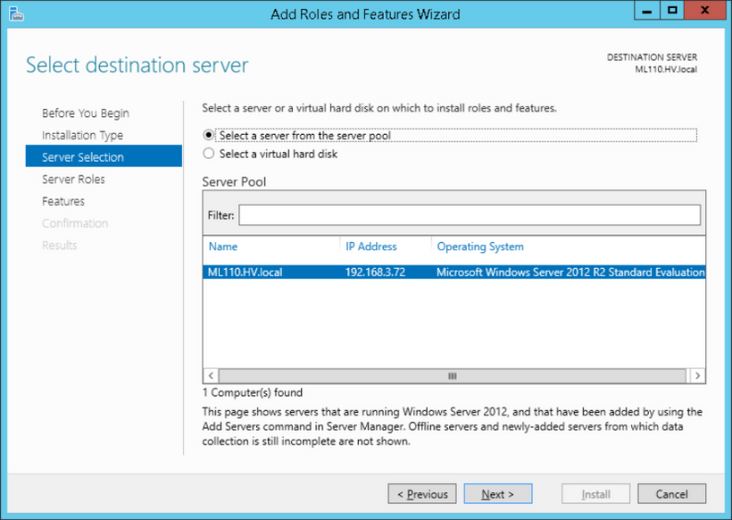 Check of iSCSI target Server is installed. If not installed, select iSCSI Target server and install the role. 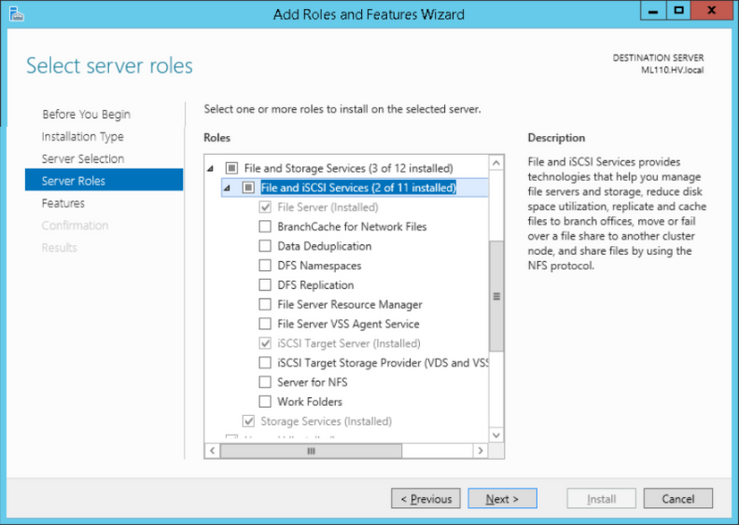 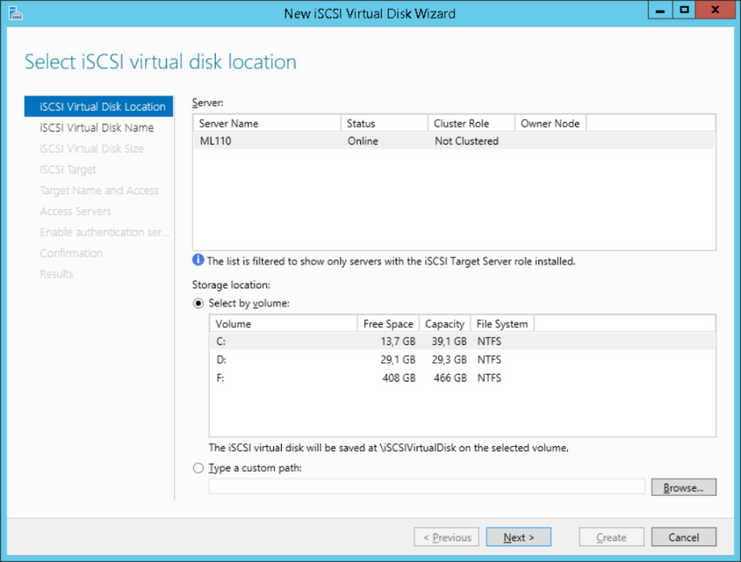 On this server the F drive is used to create the virtual disks. In the next step, the disk name needs to be specified. 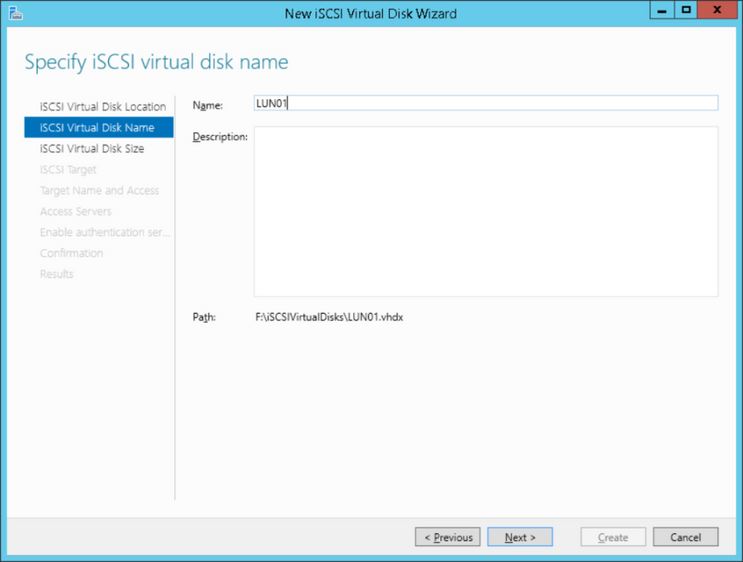 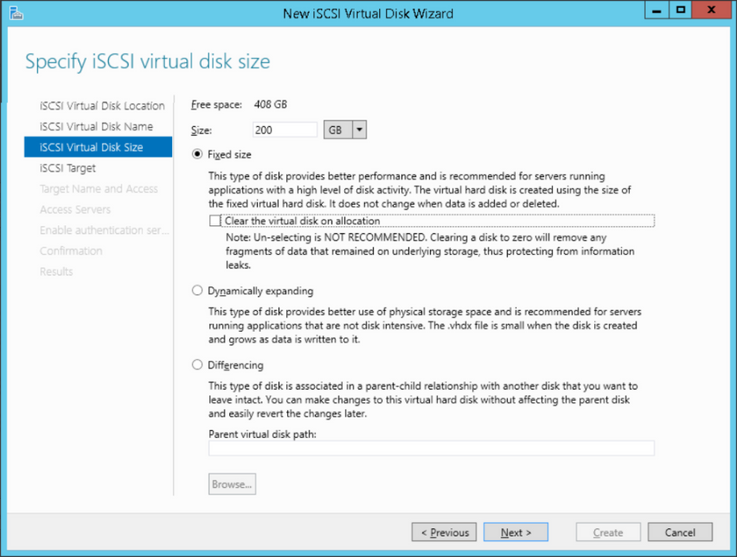 When a new system is created: create a new iSCSI target and define the name of the target. When a new virtual disk is added to an existing system: select the iSCSI target to which the disk needs to be added. 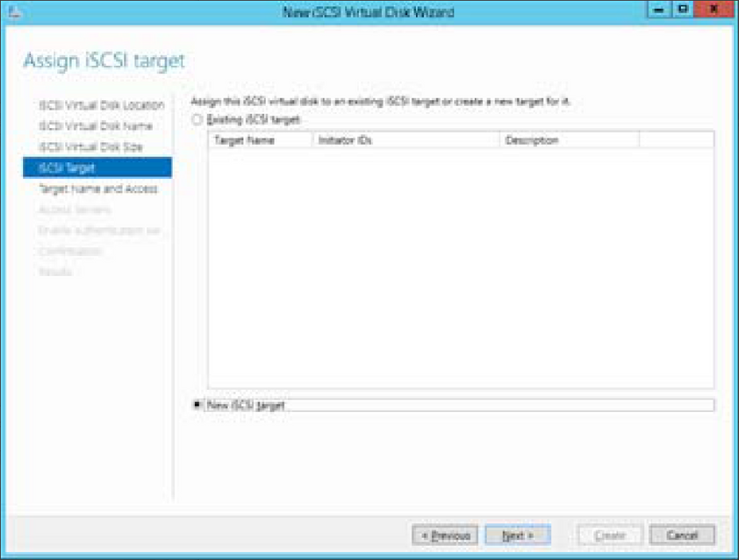 In the "Target name and Access" window the access to the target is specified. We recommend you to configure an IQN or IP based filter that ensures only the whitelisted devices have access to the iSCSI target. For demonstration purposes the "*" can be used in the IQN filter to whitelist all devices. 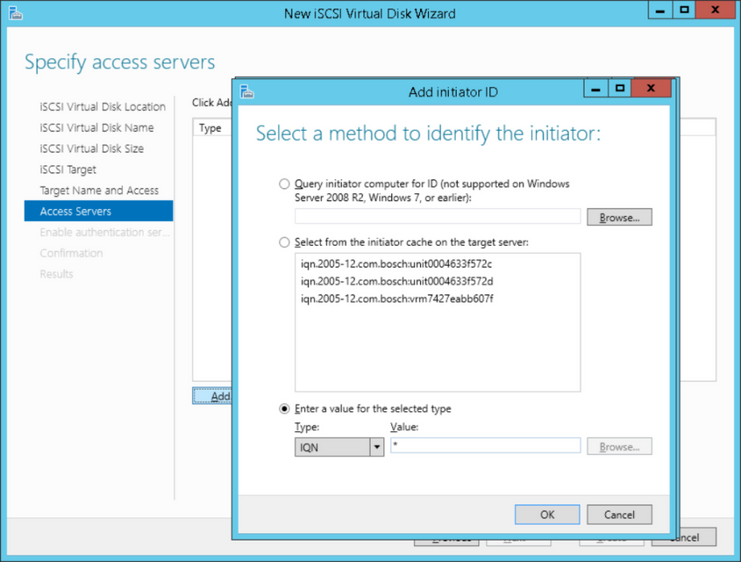 CHAP authentication is supported and can be enabled as required. The Video Recording Manager and cameras (described in their respective manuals) need to have a matching configuration. 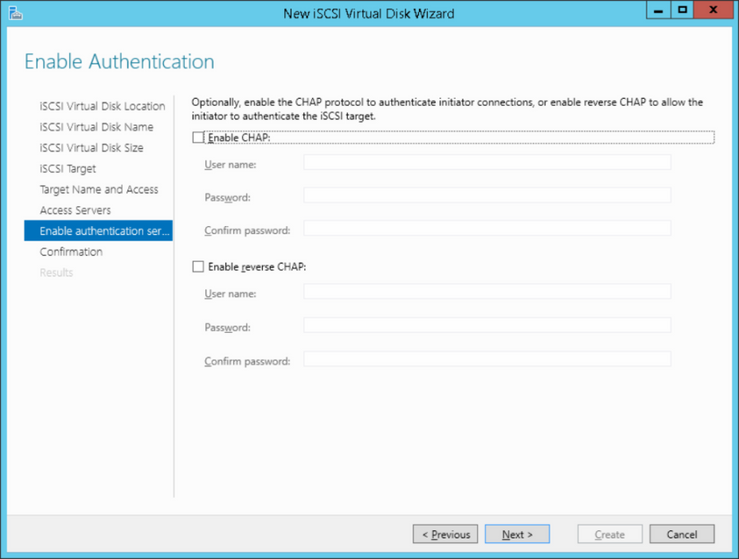 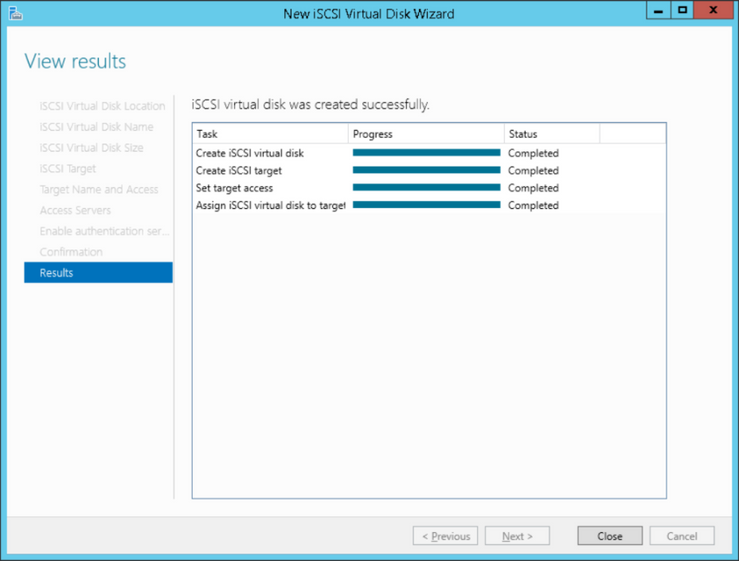 When adding a new storage device to the BVMS (as described in the BVMS configuration manual) some parameters are required. 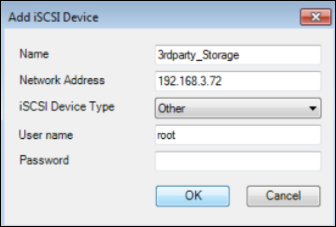 Specify the values as required, and use a Windows user-name and password which has administrative access on the iSCSI server.
Activate the configuration before making further changes.

The target needs to be scanned once the target configuration is activated. 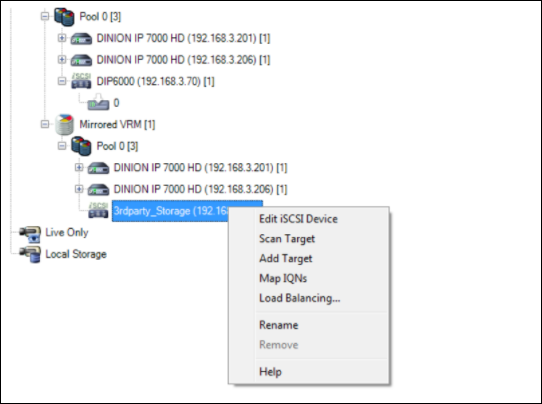 After adding the iSCSI device an error message could pop up. This message indicates the current file format on the LUN is not recognized and it needs to be formatted. Click "OK". 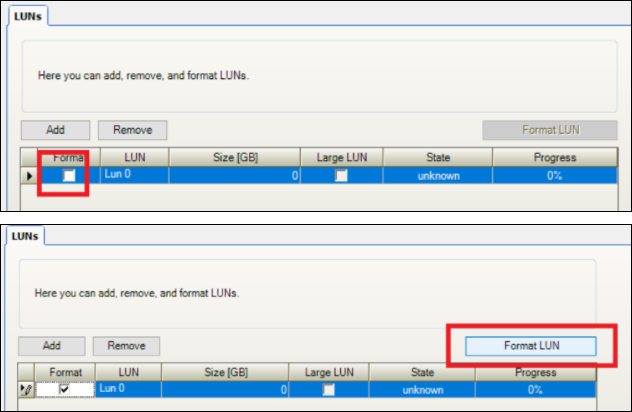 As this will be a new system no data is currently stored on the LUNs, the warning message can be accepted.

Right click on the iSCSI device, and click "Load balancing". Set the upper limits for the permitted bit rate and the number of simultaneous iSCSI connections for each iSCSI system. If these limits are exceeded, data is no longer being written to the iSCSI system and is lost.

There are three main caching techniques that can be deployed:

Recording gaps and camera disconnect messages can appear if the storage system experiences problems, or is overloaded. 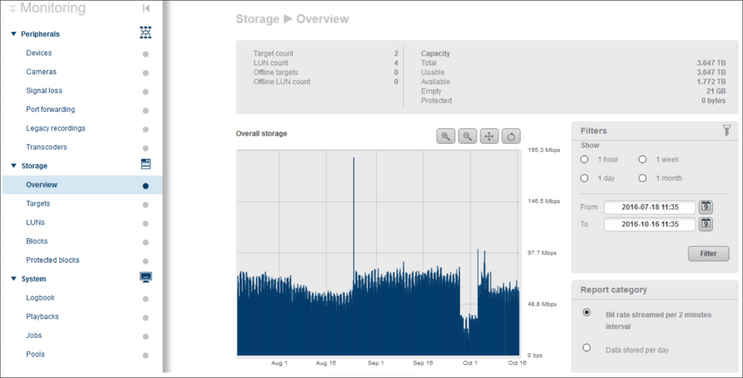 The System Logbook shows current system events. If cameras are disconnected from specific target, messages will show up in the logbook. 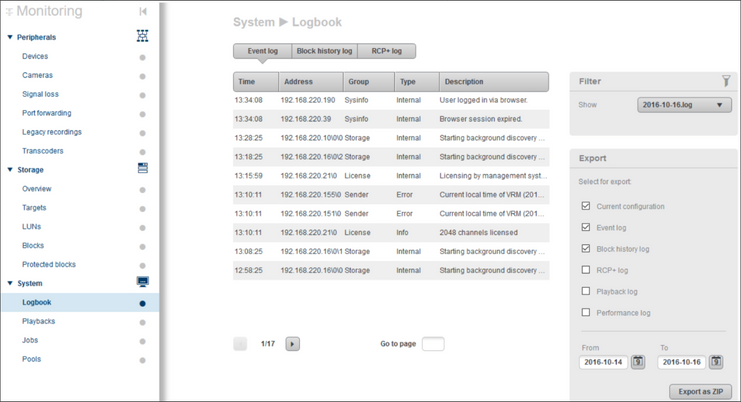 The Windows operating system also has a lot of tools on-board which can help analyze performance issues. The Resource Manager can be used to look at read/write rates, active time and response time. 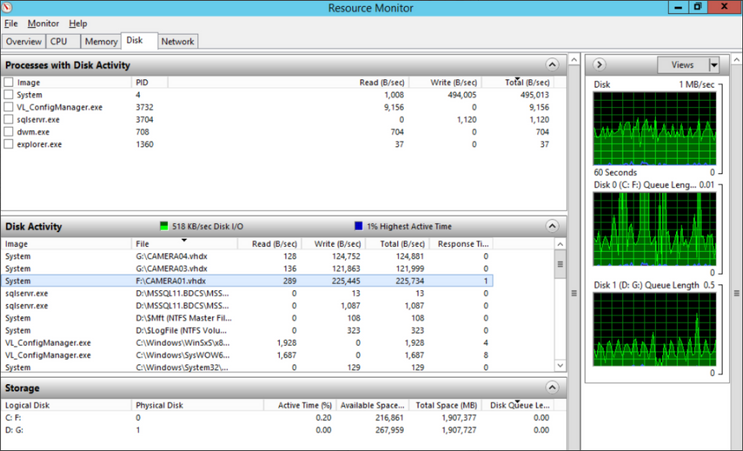 Microsoft Technet - Using performance monitor describes how to use the performance- and resource monitor.

Storage vendors may have hardware specific tools to monitor the status of the storage devices. These can give additional insights into the status of a device.
Most of these tools also allow system monitoring, and can alert when (for example) a hard-drive fails. The BVMS supports receiving SMTP messages from these devices, and can present these to the operator for follow-up. The configuration of SMTP is outside of the scope of this article, but can be found in the BVMS configuration manual.

When using Bosch storage devices, an end-to-end Bosch engineered system is delivered. As a result, components are well known and expertise is available to analyze and solve the most difficult issues.
Using non-Bosch storage devices is therefore a challenge: it is not possible to have in-depth knowledge on all storage brand and devices. This section will give clear insights in what Bosch technical support can and cannot do.

Whenever problems arise, Bosch technical support will help with:

The use of non-Bosch storage devices is based on the usage of IT standard equipment. The information linked below can be used as a reference for further information. For specific configuration manuals the storage vendor should be contacted.