How to configure idle / removed object detection on Bosch cameras?

This article describes idle and removed object detection with Intelligent or Essential Video Analytics in FW 6.30, how to configure it and what the limitations are.

Limitations:
- Not available on thermal cameras
- Does not work in crowds
- No abandoned baggage detection
- No differentiation between baggage and persons sitting or lying down
- Does not work in front of moving background like wind in trees or water
- Does not work during illumination changes or camera brightness adaptations

Abandoned baggage myths and facts:
“Abandoned baggage”: A bag that has been carried by a person and has been placed on the ground (“idle”). Afterwards, the person left the bag and the surrounding area (“abandoned”). Application target areas are often crowded train station platforms or equally crowded airport waiting areas.

THIS IS NOT POSSIBLE AT ALL:
- The bags are often fully occluded by the crowd of people and thus not visible anymore. Something that is not visible cannot be detected.
- The people are waiting, standing or sitting, and not moving any more than the bags do. Current idle object detection technology cannot differentiate whether a person or a bag is currently idle. Thus it will alarm on any waiting person as well, with a huge amount of false alerts.
- Separating and tracking people in crowds is not possible with current technologies, thus the owner of an idle bag cannot be determined, and neither can be determined whether the owner left the premises and the idle bag is therefore really abandoned.
- People wait at train station platforms and airports for hours at a time, much longer than any abandoned baggage should be alarmed on.
- If people arrive in groups, like a family traveling, often someone is asked to look after baggage while the other leaves to buy something. Thus even while the correct owner left, the baggage is not abandoned at all, but well cared for.
- The probability that a bomb is placed in a trash bin or hidden somewhere else is very high. No idle object detector will be able to find them then.
- Even if an abandoned bag is detected, the time for a potential bomb to explode is too short to do anything about it. 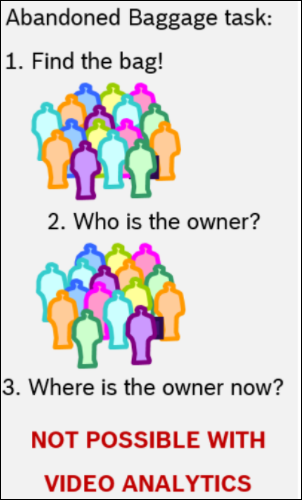 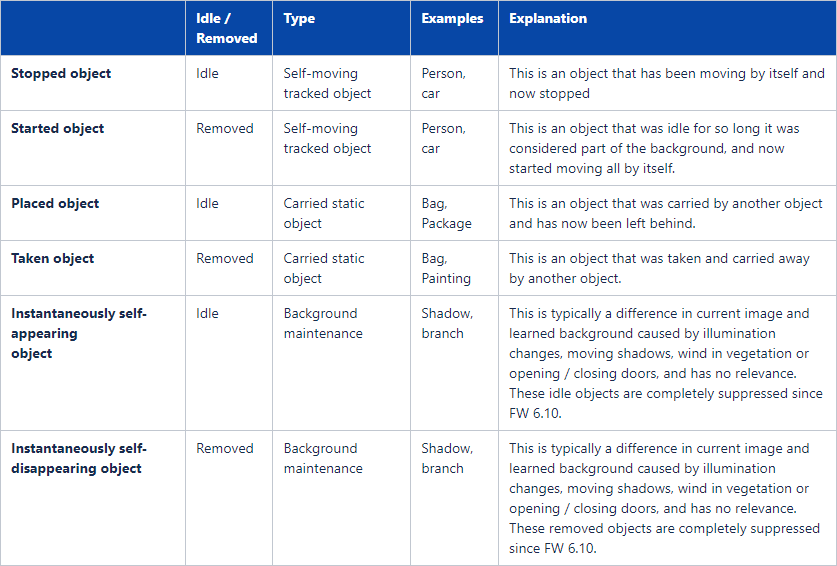 Technology
Idle and removed object detection is always based on the comparison of a current image to a background representation, which can be a single static background like with the reference image check from the tamper detection, or a learned background image as with Intelligent or Essential Video Analytics.

Thus it also has all of the limitations from background subtraction algorithms like not being able to separate close objects as they only appear as a single foreground blob and being confused by illumination changes and motion in the background as those are changes to the background, too.

For best performance, use Intelligent Video Analytics on CPP6 or higher, as this has the most advanced object reasoning using other features like optical flow, trajectory analysis and object shape analysis, as well as the best background maintenance and idle object detection based not only on one background image but a statistical representation over time.

The difference between an idle and a removed object for the video analytics is basically whether edges were taken away or added into the image.

Note that overall illumination changes or camera brightness adaptations fully disrupt the video analytics, as the difference between background image and current image becomes too large. While Intelligent Video Analytics on CPP6 or higher with FW ≥ 6.10 still continues to track the moving objects, all idle / removed object observations are still disrupted and stopped.
All other versions loose the moving objects as well. Therefore while in theory quite long idle / removed time to alarm can be supported, in practice the idle and removed time to alarm should be as short as possible to avoid illumination change disruptions.

For the configuration of idle / removed object detection using reference image check please see the tech note on tamper detection. All else is described here.

The basic metadata configuration options of idle / removed object detection are the time to alarm. The same time is also used to determine when to put idle objects into the background image and remove removed objects from the background image. Note that started objects have no configurable time to alarm, as the alarm is send as soon as the algorithm verified it is a started object.

Other configuration options allow to fully enable or disable the metadata generation of idle / removed objects. For Intelligent Video Analytics on CPP6 and higher from FW 6.10 onwards, a separate idle object size for placed and taken objects can be configured. For all other cases, the minimal and maximal object sizes from Metadata Generation -> Tracking applies.