How to configure time services in a BVMS version ≤ 10.1 environment?

Time is everything: meetings, public transportation, religion, transactions: the whole world is working because the concept of “time” exists. Within a security (or any other) system this is not different: recording schedules, logging, authorizations, encryption keys, timelines, all of these concepts can exist because of time.

As a result, time can either make or break a system: problems can appear only due to a time difference of a couple of seconds between two system components.

This article describes how time services can be configured in a BVMS version ≤ 10.1 environment.

For BVMS  version ≥ 11.0 please refer to the following article:

Time: what is the challenge?

Each device has its own internal clock, which is based on a hardware mechanism. This mechanism acts like a watch: try to put two watches together and synchronize them on the millisecond. A security system consists out of more than two devices, it can consist of thousands of devices.

Synchronizing the time of all these devices by hand is a very time consuming task. Additionally, due to small differences in electronic components, devices can have deviations from one another.

These deviations cannot be detected by the human eye, but can result in considerable time differences when a device is running for months.

“The Windows Time service, also known as W32Time, synchronizes the date and time for all computers running in an AD DS domain. Time synchronization is critical for the proper operation of many Windows services and line-of-business applications. The Windows Time service uses the Network Time Protocol (NTP) to synchronize computer clocks on the network so that an accurate clock value, or time stamp, can be assigned to network validation and resource access requests. The service integrates NTP and time providers, making it a reliable and scalable time service for enterprise administrators.

The W32Time service is not a full-featured NTP solution that meets time-sensitive application needs and is not supported by Microsoft as such. For more information, see Microsoft Knowledge Base article 939322,Support boundary to configure the Windows Time service for high-accuracy environments (http://go.microsoft.com/fwlink/?LinkID=179459).”

The Windows Time service is based on the Simple Network Time Protocol.

This section also applies for the Video Recording Manager and Mobile Video Service when these are not running on the management server.

Microsoft has prepared a lot of documentation related to time configuration Go to the Microsoft Support: How to configure an authoritative time server in Windows Server page and scroll down to the section “Configuring the Windows Time service to use an external time source”. Click the download button under the “Here’s an easy fix” section. 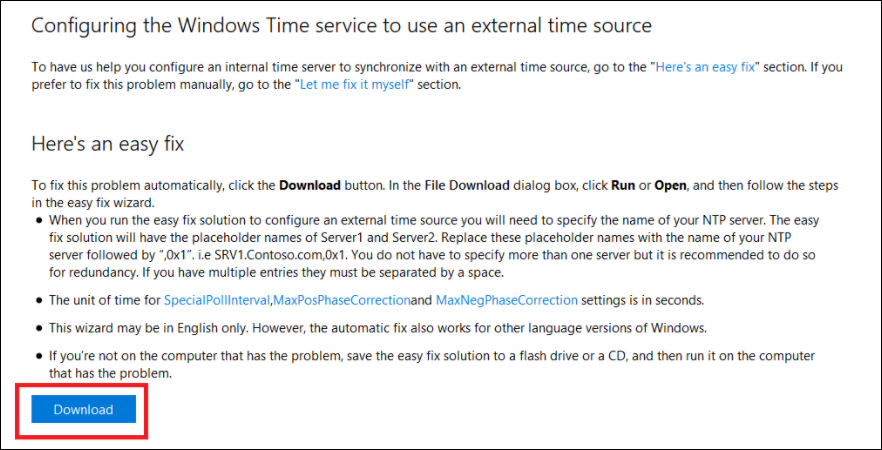 The utility will configure external time servers. To select these, browse to http://pool.ntp.org and select two servers which are related to the geographical location of the system, for example “de.pool.ntp.org” and “nl.pool.ntp.org”, referring to Germany and the Netherlands. Another (local or external) (S)NTP server can also be chosen.

Start the Microsoft configuration utility and configure it as indicated and shown in the figure below. 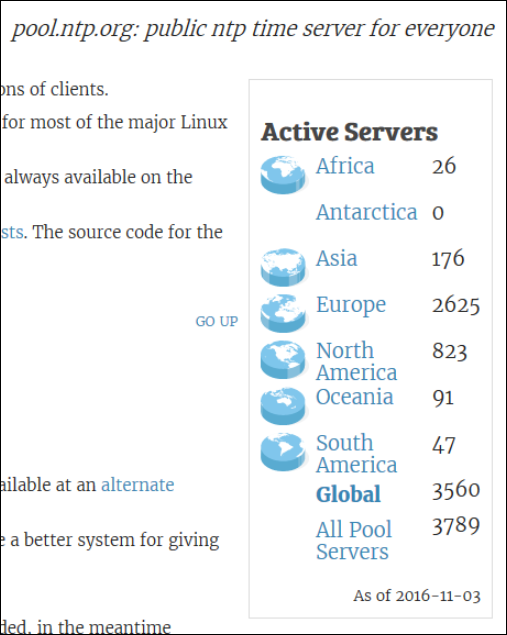 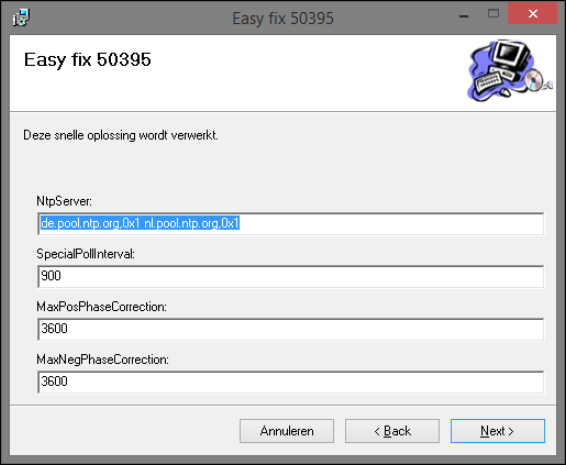 Alternatively the configuration can be done from the command-line, using the command shown below.

The configuration can be verified by starting the Windows Command prompt and issuing the command “w32tm /query / status”, as shown in the figure below. Notice the time source, this should point towards the configured servers.

It can take up to one minute before the correct time source is displayed.

When there is a problem, the configured (S)NTP server can be tested by issuing the “w32tm /stripchart /computer:de.pool.ntp.org”, which should result in the output displayed in the figure below.

When an unexpected result is returned, it is recommended to check access to the specific (S)NTP server. A firewall might prevent the communication between the (S)NTP server and the management server.

BVMS automatically points devices to its own time-server. This can be changed by editing the BvmsCenterlServer.exe.config file, located in C:\Program Files\Bosch\VMS\bin\. Find the key "TimeServerIPAddress" and adjust the value, as shown in the example below (192.168.0.1).

The Bosch Video Management System Operator client runs on a Windows workstation. When the workstation and server are part of the same Microsoft Active Directory service domain, no manual time synchronization needs to be configured. 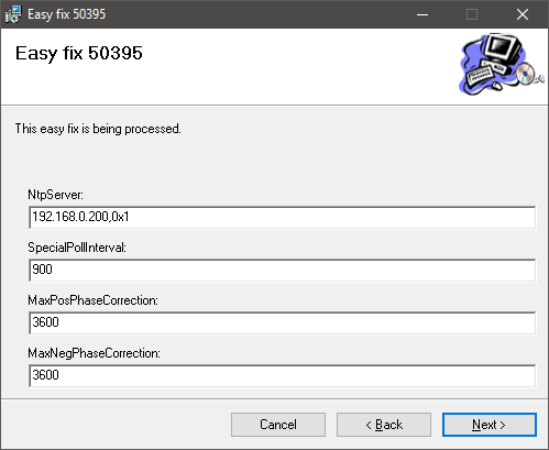 Figure: workstation configuration, "192.168.0.200" needs to be replaced by the IP address or Fully Qualified Domain Name of the management server.

If a camera is connected to a BVMS system the time server will be automatically configured.