This article summarizes the BVMS design details, and serves as a guide to planning a BVMS system with Bosch cameras and storage. It focuses on BVMS combined with the VRM.

The BVMS 11.0 release notes can be found on the Bosch Security Systems website. This article lists the valid design specifications for BVMS 11.0. 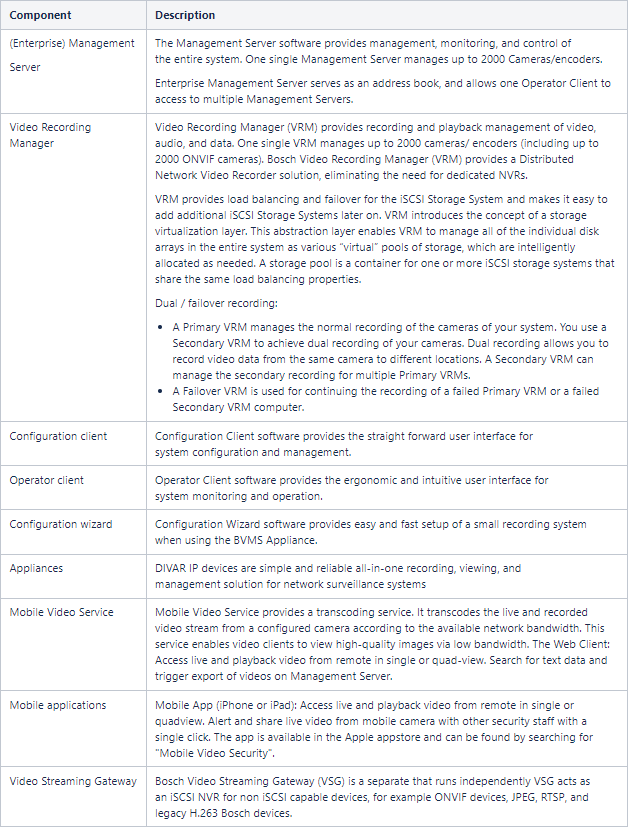 The recommended hardware for the Operator Client, VRM and server components (Management Server, VSG and MVS) can be found on the different (BVMS Professional, Plus and Lite) datasheets. The recommended hardware is fine-tuned to the maximum system size.
The server components of the BVMS can be virtualized. More information on virtualization can be found in the Virtualization - A concept explained document.

The BVMS Network Design Guide (which can be found on the Bosch Security System Community) describes general recommendations related to the network.
To achieve the performance listed in the table below, an 1 Gigabit/s network is a minimum requirement between the Operator Client and Management Server.

The overview below relates Windows version to specific BVMS releases. We distinguish two levels of compatibility: 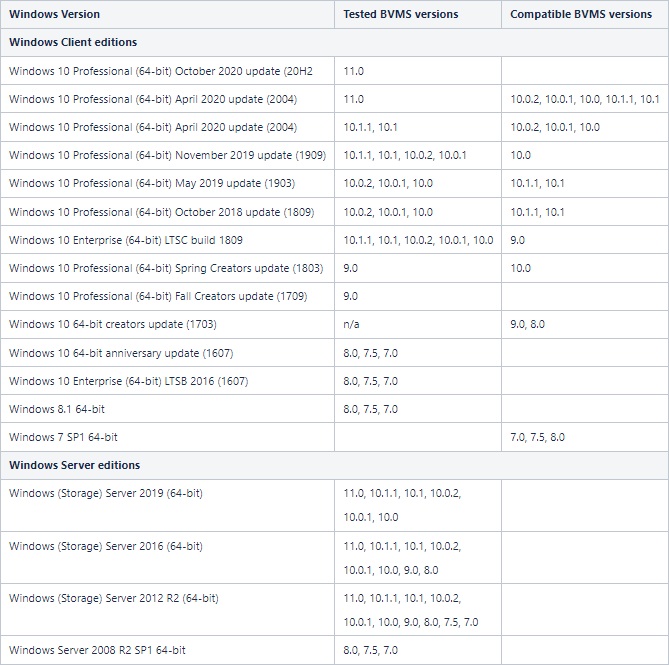 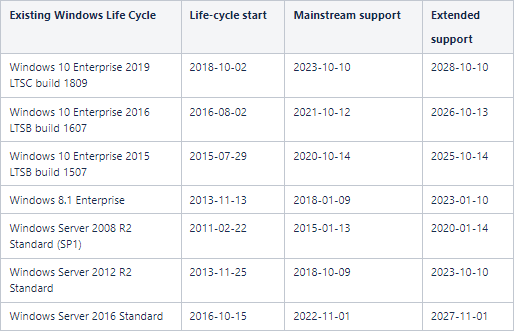 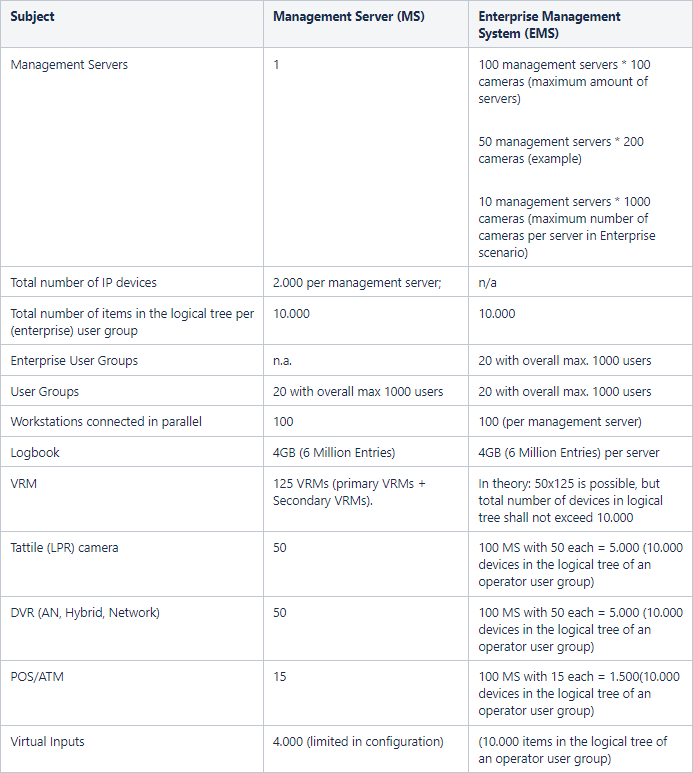 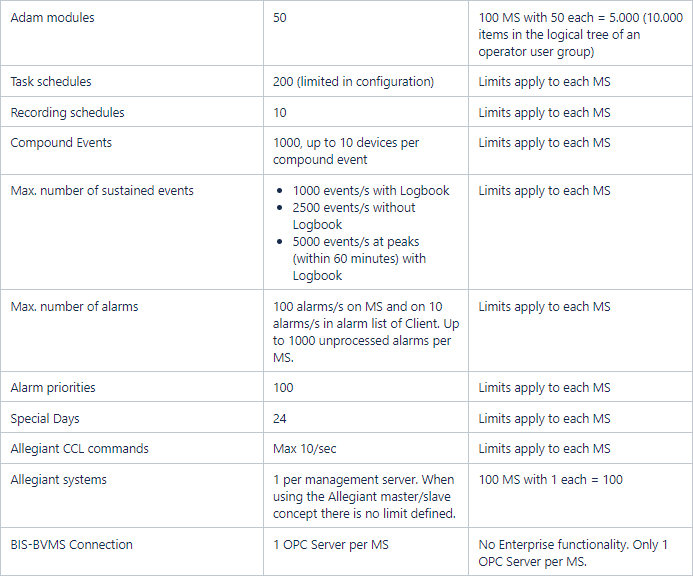 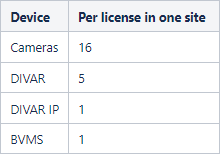 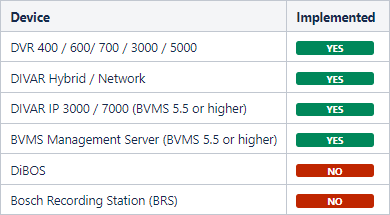 Consider this table for the design decision to go for unmanaged site concept on a Professional License or for a “Managed Solution” => Enterprise license with subsystems.
A subsystem is equal to a site. 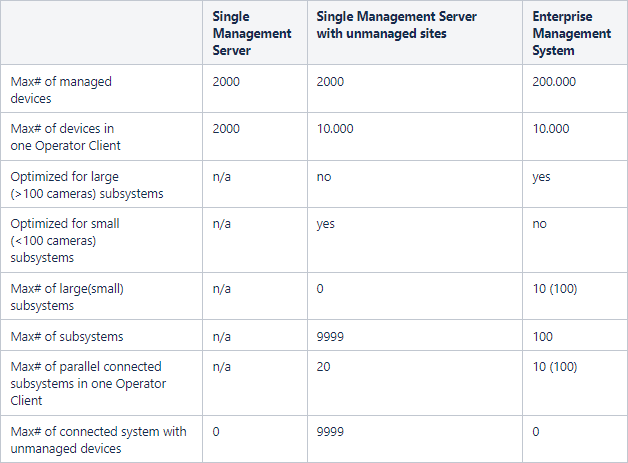 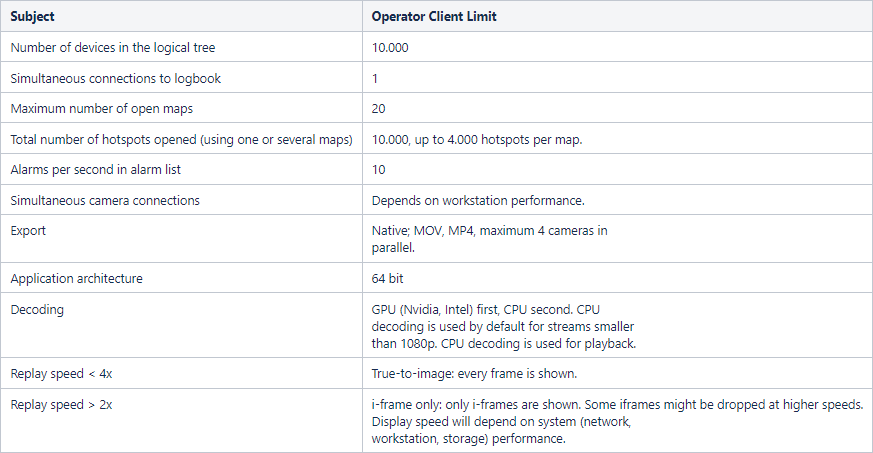 When an operator client is connected to an older version (then itself) of the (Enterprise) Management Server, it will run in compatibility mode.

In production systems it is not recommended to use versions which are released more than two years apart. 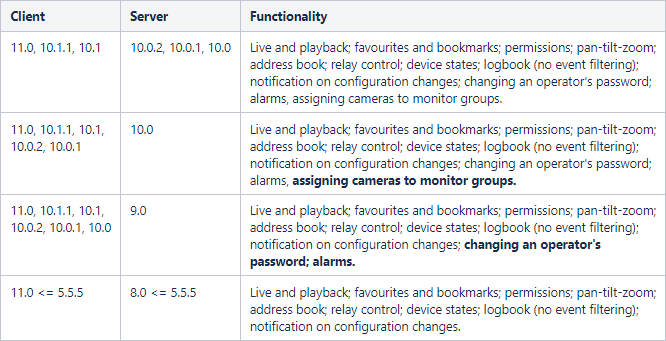 The web client requires a Mobile Video Service (available with the BVMS setup). 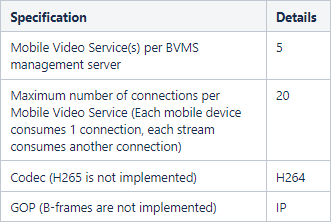 The speed at which a map is opened is depending on the amount of objects that is placed on a map and the size of the map file. 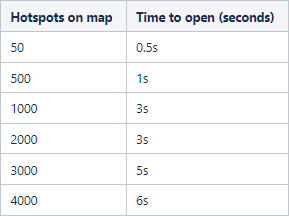 The amount of maps that can be opened simultaneously is also depending on the amount of objects that are placed on a map.

With BVMS 11.0, new Global Maps feature was implemented. It is possible to use it with:

There's no limit for number of viewports, that can be configured to create crop view of the Global Map, available in the device tree.
Map-based tracking assistant is only supported with Global Maps module.

For DWF: Only use layers containing the building structure and remove all unnecessary layers (for example, electronic, water, and others) as they increase the file size of the file, and therefore the loading time. 3D and multimaps cannot be used. It is recommended to use DWF files with version 5 or higher.

*In Global Maps feature, introduced with BVMS 11.0, only PNG and JPG format are supported.

For remote security connectivity the built-in SSH service can be used. Due to the increased overhead it is not recommended to use the SSH service's functionality in a local network:

The number of cameras is depending on the bandwidth generated per cameras. 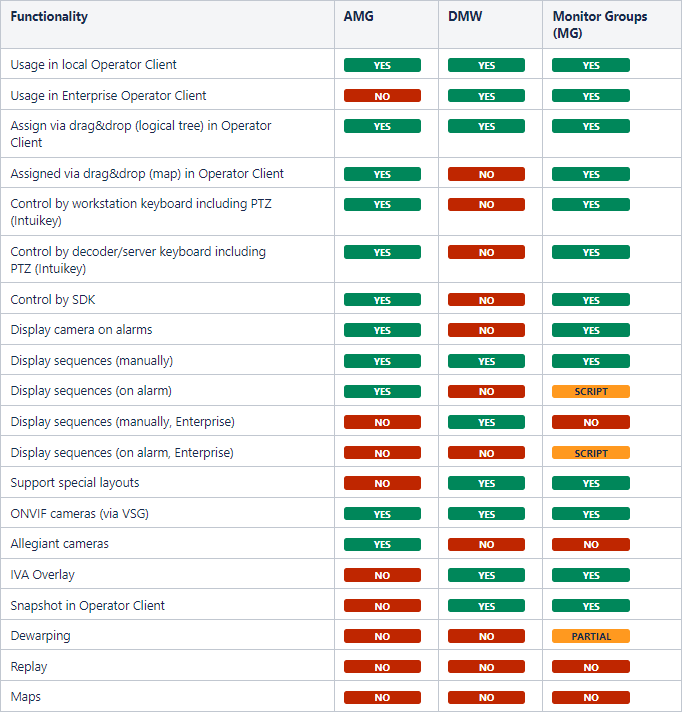 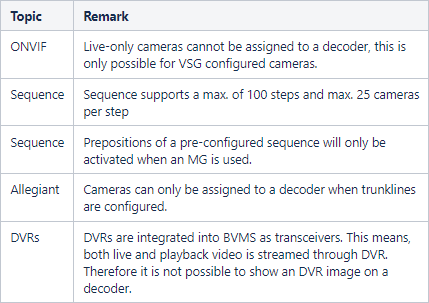 While we are working on improving the security configuration, the following settings are tested related to the usage of decoders. 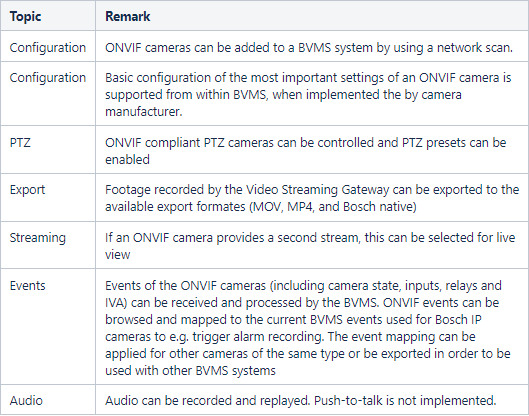 The latest list of tested ONVIF cameras can be found on https://community.boschsecurity.com

Some manufacturers do not provide a de-bounce time, leading to events occurring in high frequency. Therefore, please ensure that the total event load in the system does not exceed 500 events/second. To ensure this:

The Video Streaming Gateway acts as an iSCSI NVR for ONVIF cameras in the BVMS environment.

When designing a system, all of these factors must be considered in order to build a cleanly-functioning system. When using a standalone server, the VSG throughput will vary based on the hardware platform itself. Older generation servers could provide 350 to 400 Mb/s of throughput. This includes both the RTSP pull from cameras, as well as the iSCSI push to the storage target. The new Generation 10 Server can supply 3000 Mb/s of throughput.

The second part of the equation is the available throughput of the iSCSI target. 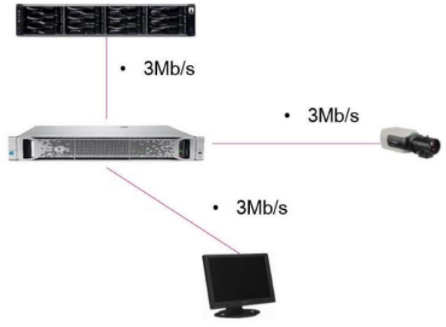 The table below shows the VSG performance when using DIVAR IP appliances.

The table below shows the VSG performance when using a dedicated VSG server combined with an external iSCSI target (for example, the DSA E2800).

Bandwidth calculation for a single camera would be 9 Mb/s. A 100 camera system would be calculated at a theoretical worst case scenario 900 Mbit/s.

BVMS offers two ways to access the system from a remote connection: 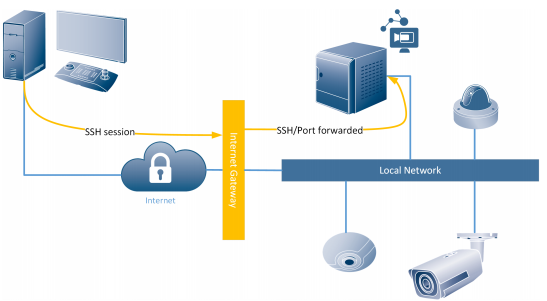 The SSH client is embedded into the BVMS Operator Client. The SSH service can be, optionally, installed on the BVMS management server. When using SSH tunneling, all BVMS related traffic is routed through the SSH service and this will therefore also create a single-point-of-failure in the system.

Due to the huge amount of data that needs to be transferred to the BVMS operator client a limited version of Forensic Search is available when connected to a BVMS system via SSH.

Transcoding enables to BVMS Operator Client to operate within low bandwidth (>=300 kbit/s) networks.
If no transcoder sessions or hardware transcoder is available in the VRM no image will be displayed in the BVMS operator client. Transcoded videos are selected by operator per device and it will be indicated in the cameo that a transcoded stream is being used. The following operations cannot be executed when a transcoded session to a device is used:

Software transcoding is offered in Operator Client as a fall-back level when no hardware transcoder is available, but only for live.

When planning for larger environments we strongly recommend using large sized disk arrays instead of a large number of small disk arrays (vertical scaling instead of horizontal scaling). For systems with more than 40 disk arrays, please contact a Bosch Pre-sales engineer. iSCSI based storage systems not qualified by Bosch are not supported.

One VRM is required to manage:

Direct iSCSI and Local Storage is supported for devices which support Firmware 4.x and above. I.e. no Local Storage support for VIPX1/X2 and VJ800x.

Pre-Alarm, Alarm and Post-Alarm, while pre- and post- must be at least 15 seconds. This means, pre-alarm is always streaming over the network (except when using ANR).

Continuous, Alarm and Post-Alarm, while post must be at least 15 seconds.

VRM/iSCSI and local recording do not support the configuration of Holidays for recording. Special Days must be used. 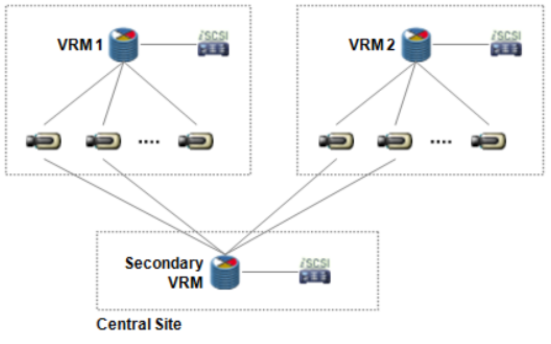 ANR is meant to buffer network outages and then push it to storage, once network is back.

Person identification is currently only possible with Bosch cameras. 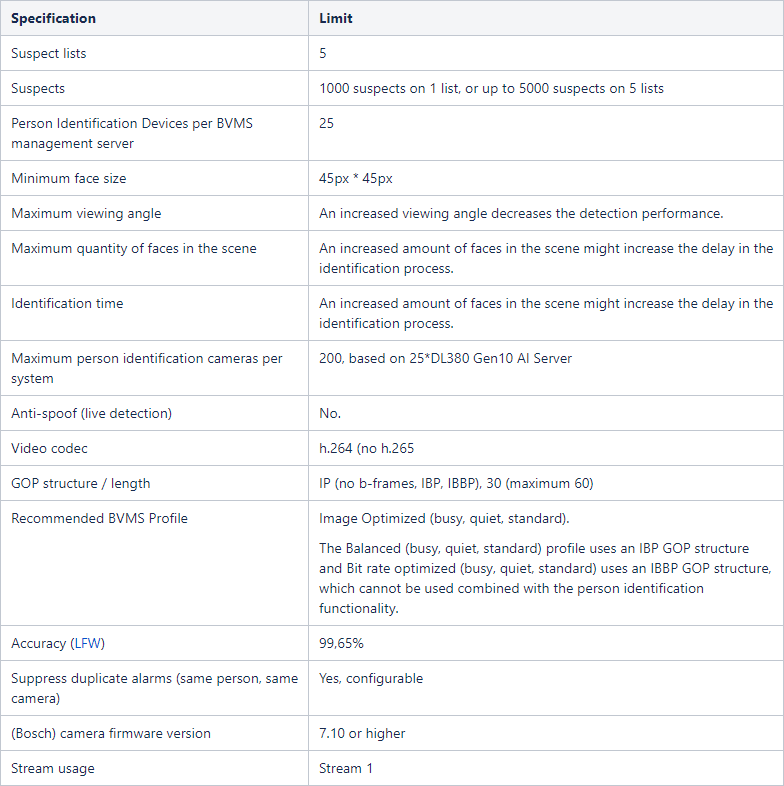 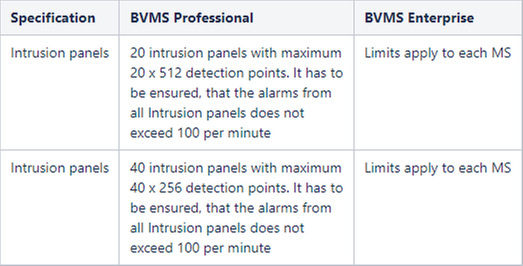 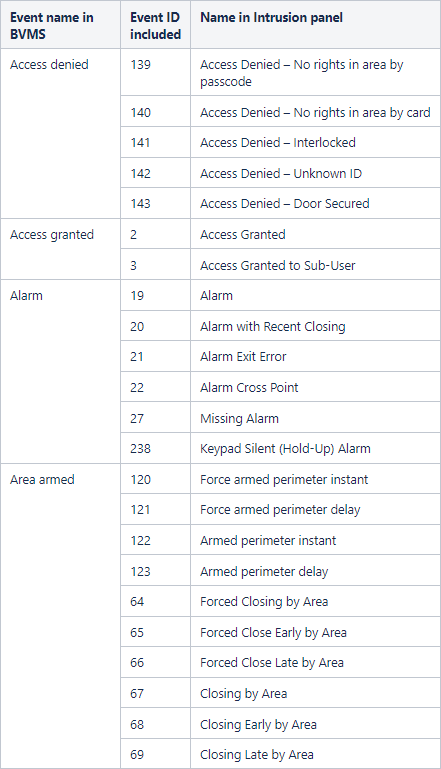 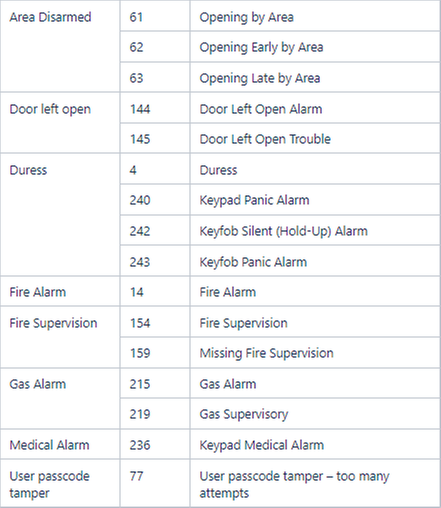 From BVMS 10.0 onwards the BVMS installation package can be directly installed on the supported DIVAR IP devices.

BVMS can operate in a system with:

One MBV-XDVR-xx license is required per DVR. The connected cameras are included. 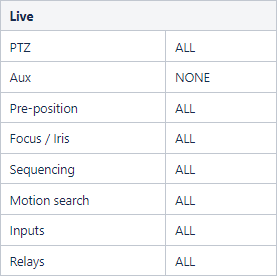 Each DIVAR can handle up to five simultaneous connections. One connection is consumed by:

The BVMS management server, the VRM and the workstations can function perfectly in an enterprise (domain) environment. Bosch recommends the following:

When problems arise when running BVMS in a domain environment, Bosch recommends looking at the Windows event log for service start-up problems. Alternatively the BVMS Config Collector can be used to gather the required log files and these can be send to the technical support team for further analysis. 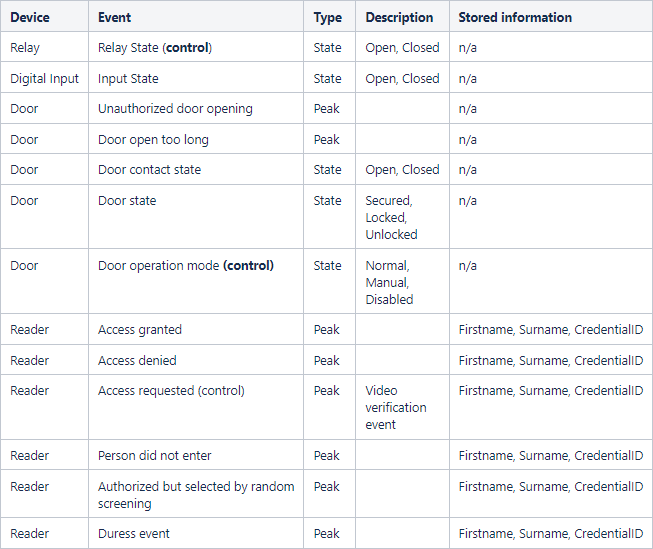 When installed on a single device, BVMS installs the services mentioned in the table below.

Technical support services and upgrading to a newer BVMS version requires Software Assurance PRO. The table below can be used to check the exact release dates of the different BVMS versions. 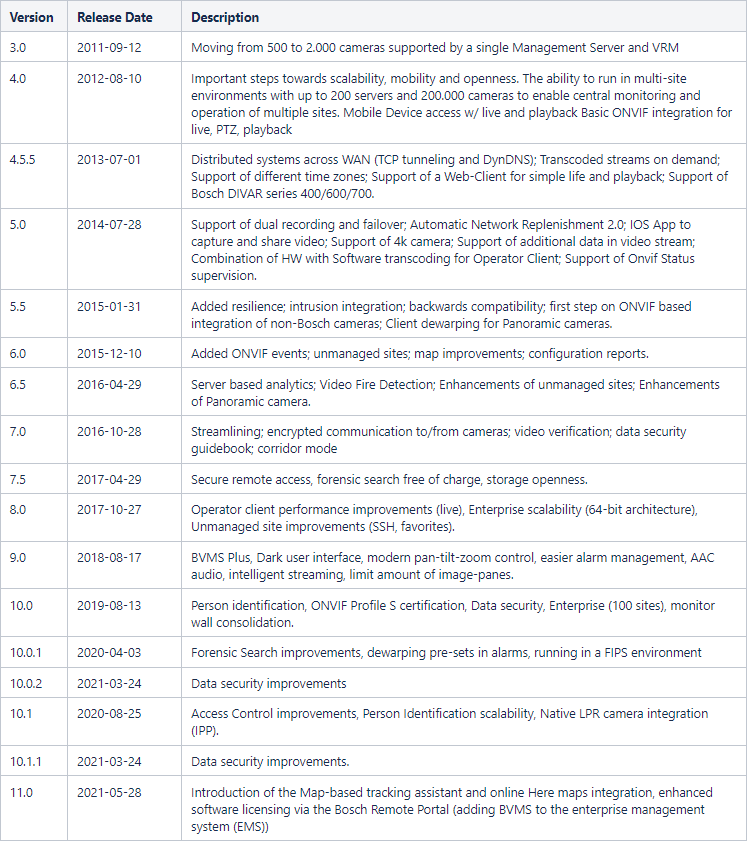