In this article, we will address the difference between Cloud Storage & Event alarm clip and what the customer is entitled to base on the licenses he had purchased.

Whenever the VSaaS is been configured with one of the services that generates events, such as the Live Intervention service, the system will record a 10 secs event clip that is tied to the event.  This event clip can be playback in the Verification Mode interface in the EVENTMONITOR web interface, Diagnosis Module and the Site Monitor app.  Similar to the events life span, these clips will be kept in the system for 30 days.

Different type of cameras and the availability of local recording (SD card, VRM based, direct-to-iSCSI) has different effect on the 10 secs event clip, below is a summary of what you would expect

For 3rd party camera with Bosch plugin but without SD card recording and 3rd party ONVIF camera, only 10sec post-alarm can be available, as the system will only pull the video from the camera when an event is been triggered, hence, do expect the video clip may not start at the exact moment when the event is been generated.

Cloud Storage as the name implies the recordings are stored in the Cloud, the customer is entitled to X amount of storage (from 50G to 1TB) depending on the license he had purchased.  Below are the CTNs for the Cloud Storage.

Each of these licenses entitled the customer a storage space of X GB per month per camera and this license is valid for 1 year.  These Cloud recordings are only accessible via Live View interface in the EVENTMONITOR web interface.

Note that the Site Monitor app does not access to the Cloud recordings.

The recordings will be overwritten in a First in First out basis and no bring forward of remaining storage to the next month.  In additional, user can set the retention period for each camera recording, with the maximum retention period as 30 days.

For example, a customer purchased a CBS-REC-MINI, he will be entitled 50GB “Cloud space” for 1 camera to record onto and he had set the retention period as 30 days. If the camera utilize only 10GB/month, the customer will still only be able to playback 30 days of the recording.  However, if the cameras require 60GB/month, the customer will not be able to playback 30 days of recording, due to the camera consume more than what is available and hence, the first in first out principle overwrites onto the older recordings.

It is also not possible for the customer to “add-on” storage space by purchasing another license, as only one license can be applied to a camera at any one time.  For example, a customer has purchased a CBS-REC-MINI and later found he need more storage to cover the 30 days requirement, by purchasing another CBS-REC-MINI or any of the above CTN will not allows him to apply the license to the camera until the existing license has expired.

There are 2 modes of Cloud Recording, Post Alarm recording or Continuous Recording, only 1 mode can be configured for each camera. 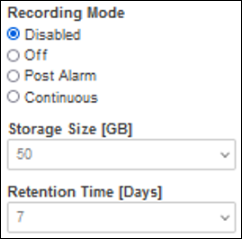 When a camera is configured for Post Alarm Recording, it will only records when an event happens.  There will be a slight difference in the way recording is done based on the type of cameras and availability of local storage.

In this mode, the cameras will continuously stream to the Cloud and these are recorded into the cloud storage.  Hence, it is important that the available bandwidth available at site is sufficient to handle the upstream from all these cameras.