How to control Advantech ADAM IO devices by Bosch Cameras?

Overview of the Integration

In many camera systems installed for observation and or security purposes, the camera is used as an information gathering source, providing video streams and I/O alarm facilities as part of the total system.

Information, such as scene details in the provided camera’s stream, can be sent to monitoring centers where operators can interpret the relevance of the information. According to his or her human involvement in this case, the follow-up actions for this information for the end-user are manually invoked.

In systems where no operators are available, the same camera information can be diagnosed internally; programmed and processed via smart algorithms in the camera and, as a result, IP connections are invoked to follow-up automation by other smart devices on the network.

In this article, you will find such an automation process between Bosch Cameras and Advantech Adam I/O devices.

In various Verticals, this Bosch - Advantech combined solution can fully automate adequate follow-up actions for the end-user without the cost of a video management system and human intervention.

1.2 Principle and benefit of the integration

In principle, a Bosch Camera embeds Intelligent Video Analytic algorithms that can be utilized internally as source for its own Alarm Task engine.

This Alarm Task Engine has a dedicated Script editor (a sort of Macro editor and compiler) that allows an installer to combine internal events, I/O triggers as well as the output of IVA rules for smart follow up automation. These powerful macros are called ATSL Scripts.

These installer programmed ATSL scripts are the smart engine for controlling the Advantech Adam devices and to propagate the processed camera intelligence to end-user devices as automation.

The concept can be expanded as required and is not limited to a single camera, single Adam device. On the contrary, one camera as “smart detector” can control multiple I/O devices in your network.

The script integration, once programmed, is autonomous and works independently.

1.3. Advantech products for this integration

1.4 Bosch products for this integration

For this integration, basically all Bosch Camera types will work provided that:

2. The camera supports Adam’s Basic Authentication protocol (which all Bosch cameras do)

3. The camera supports ATSL scripting (which all Bosch cameras do).

Technical details and setup of the integration

There is not much preparation for the ADAM units as long as the unit complies with the chapter 1.3 requirements.

Best practice is to start the ADAM unit in a factory default setup and set the device IP address.

You can use the Advantech AdamApax .Net Utility tool for this.

This tool was also used in the test screenshots of this document to show the ADAM relay status while testing. 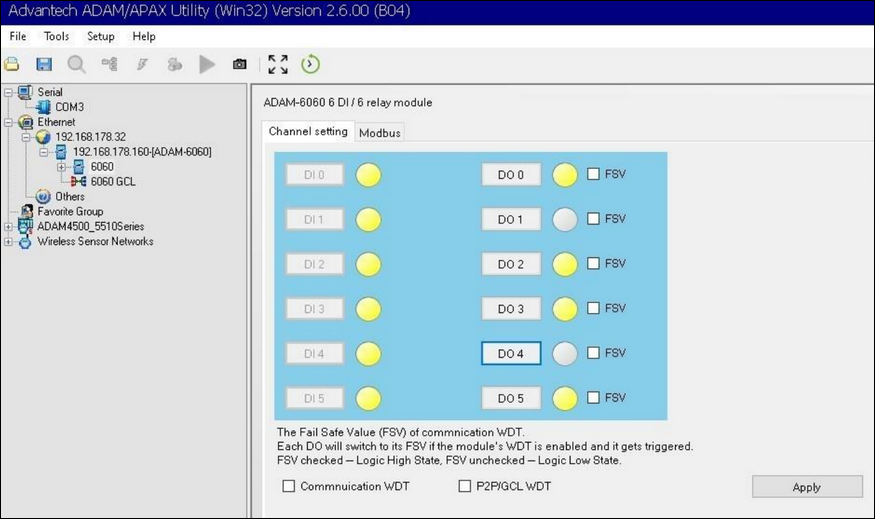 ⬇️ The tool to set up these functions is provided by the Bosch Configuration Manager and can be downloaded here.

There are also various instruction videos published on YouTube, for example:

The Bosch Camera Alarm Task engine is the camera’s on-board smart interface between the cameras IVA detection events as input and the resulting controlled Adam device as output.

The autonomous operation of this solution is based on the smartness of the Alarm Task Script that manages the above process flow as a pre-programmed follow-up of site activities.

Example: A door will be locked for a person crossing a line allowing only traffic in the other direction.

The Script can be added, edited and compiled all via the Bosch Configuration Manager tool.

This is what an example Alarm Task Script looks like in the Configuration Manager:

Test and see the integration at work!

The Test described below shows the basic concept of forwarding an IVA Rule trigger in the camera to an IP connected ADAM I/O device.

Once you have set up the ADAM IP address and line trigger for your application in the camera (using the Configuration Manager or WebBrowser), the smart interfacing via the Alarm Task script can be programmed.

In this test, we will use an IVA rule alarm (Rule 1) to control the ADAM Data output 0(=DO0) transparently.

The script to do this automation looks like this:

As indicated, the Alarm Task Scripting editor can be used to implement tailor-made IVA controlled routing to multiple Adam Outputs.

This flexible routing principle makes it possible to signal IVA events generated from one location to remote locations as desired.

Another advantage is that in this autonomous camera controlled system, the IVA Alarms can be interfaced to any other low or high level system.

Bosch cannot not accept any liability on implementing or using scripts mentioned in this document.

Your activity in developing products that interface with Bosch products is at your own risk and responsibility regarding fitness for use, completeness, faultlessness, or any claims of third parties which may arise based on such further development.