How to create NIC-Teaming in Windows Server on DIVAR IP R2 and HP Gen 9/10 server?

NIC Teaming is a very nice Windows networking feature that lets us use more than one adapter in a paired mode (team) for better speed and more redundancy. When enabling NIC Teaming, we will need at least two adapters present on the Windows Server machine, and that’s about it. Yes, just two physical adapters, no extra software or what not.

In the past (prior to Windows Server 2012 R2), in order to perform NIC Teaming, we would have needed two adapters which were from the same vendor, and a third-party software that would make the teaming possible and present the OS with just one “virtual” network card.Now from Windows Server 2012 R2 and up, this is built-in and its hardware agnostic. This means you can use whatever network cards you want and the teaming will work like a charm.

When we are teaming adapters, we are taking two or more physical adapters, up to 32, which are connected to the same switch, or different switches, and we are presenting them as one NIC to the operating system. Thus, all the traffic from the OS will pass through that one, let’s call it virtual NIC and then it will pass load balanced between all the physical NICs assigned to that one virtual NIC.

1. First, we go into Server Manager and click on the local server to bring up the dashboard.

2. As we can see NIC Teaming is set to Disabled. 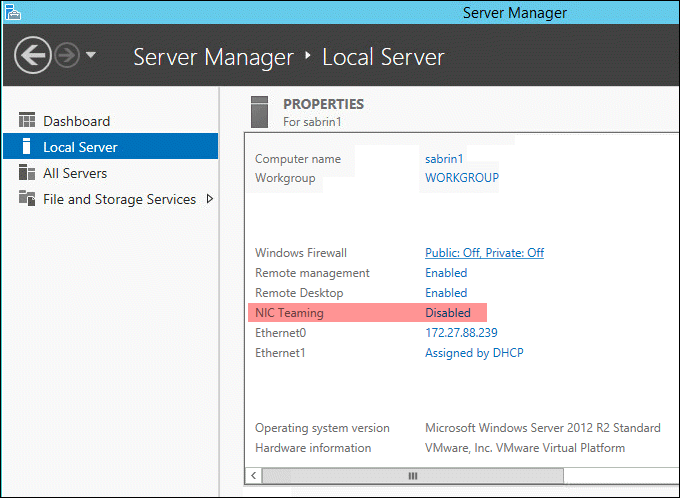 We are presented with this NIC Teaming dialog box where we can create a new team using the two network adapters that we have available to us, which are Ethernet0 and Ethernet1 2 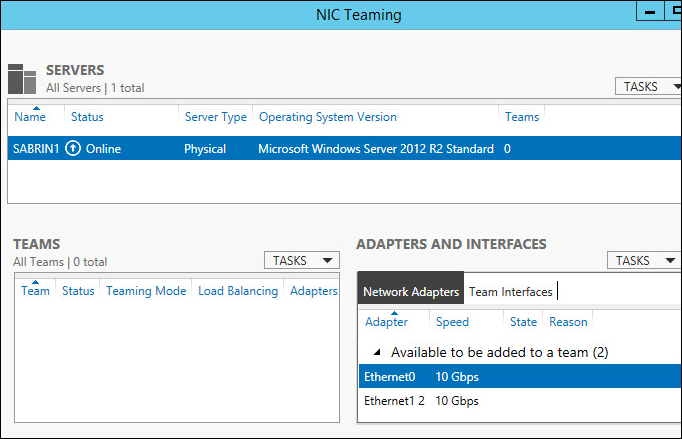 In the New Team dialog box, we have several options to choose from: 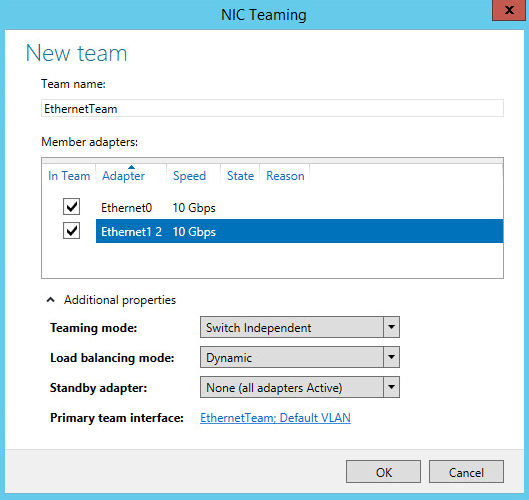 5. The Team Name is the name of the virtual NIC as we will see it in the network connections folder. This can be anything you want, we chosed EthernetTeam.

6. Then we have to select the members of the team. We can choose to have several teams as it’s not required to add all the NICs under one team.

7. Then we have Additional properties. Now, I had to expand that list, since by default it’s hidden. Which means, it would be enough to just click OK after you selected the NICs and everything would be fine.

But in our case, we like to go into tiny details, so let’s see what each of the option does.

Teaming Mode is the mode the team will work on. We have several options:

8. Now we also have to choose the load balancing algorithm.

We have three of them: Address Hash, Hyper-V Port and Dynamic. Now let’s see what each does.

Once we are done with the above configuration, we click OK and wait for the teaming to come online.