What is virtualization? - A concept explained

This document describes the basic concept of virtualization. It gives the reader an insight into the technology itself, as well as the applications and benefits. It also puts the technology into the perspective of the safety and security industry.

Running software on top of a virtual infrastructure increases the complexity of the troubleshooting process. Bosch after-sales support teams might ask you to prove the resources assigned to the virtual machine match the resources described in the datasheet of the specific software. Please note Bosch after-sales support teams cannot troubleshoot performance issues of the virtual infrastructure itself, but can only indicate a lack of resources exist.

This section introduces the concept of virtualization. It explains three basic terms (hypervisor, virtual machine and system management) and should allow the reader to understand what virtualization is.

Virtualization introduces an additional layer between the operating system (for example, Windows, or Linux) and the hardware. This layer is called a “hypervisor”. The image below shows a traditional system configuration, without hypervisor.

A hypervisor exposes, shares, and distributes hardware resources to an additional layer of virtual operating systems (shown in the image below) or, “virtual machines”. 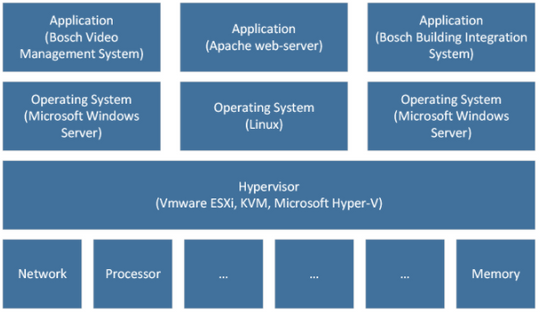 A virtual machine is a "computer". It has one or multiple (virtual) processors, (virtual) memory, and (virtual) hard disk drives. Instead of communicating directly with this hardware, the virtual machine communicates with the hypervisor. However, the virtual machine itself is not aware of this and will act mostly the same when its behaviour is compared to a physical machine. This means that a virtual machine has a BIOS which allows some low-level configuration, and an operating system (for example, Windows, or Linux) can be installed, on top of which applications (like the BVMS and BIS) can run.

The technology is, of course, very interesting. But why would we introduce all of this complexity into an IT environment which is already complex on its own? In other words: why would we use the concept of virtualization at all?

Virtualization enables multiple applications to run on a single hardware device, while still being (logically) decoupled from each other.

In essence virtualization enables a more effective use of the available computing power: instead of consuming 5-7% over 20 physical servers, we can consume 20-35% of computing power over 5 physical servers. This, of course, depends on the nature of the application(s) that is running in the environment. In this example this results in a reduction of 15 servers: purchasing, power, cooling, network connectivity and maintenance are all reduces with 75%!

Most hypervisors are free of charge, so licensing costs are not increased on the hypervisor. Operating system licenses also need to be purchased and maintained for physical machines, no difference in this area. However, the additional management software (which is mostly forgotten, Microsoft also charges to use System Center while the hyper-v hypervisor is more or less free of charge) does increase the licensing costs considerably. The additional complexity also requires time, training and experience from IT management staff.

Due to the constant monitoring of the management service, it knows that state of the environment and can act when failures occur. The most common functionality, shared across different platforms, is explained in this section.

The image below shows the VMware concept. VMware ESX represents the hypervisor in this image. Microsoft and Stratus offer similar functionality.

The image below shows the VMware concept. VMware ESX represents the hypervisor in this image. Stratus offers similar functionality. Microsoft does currently not offer this as part of Hyper-V. 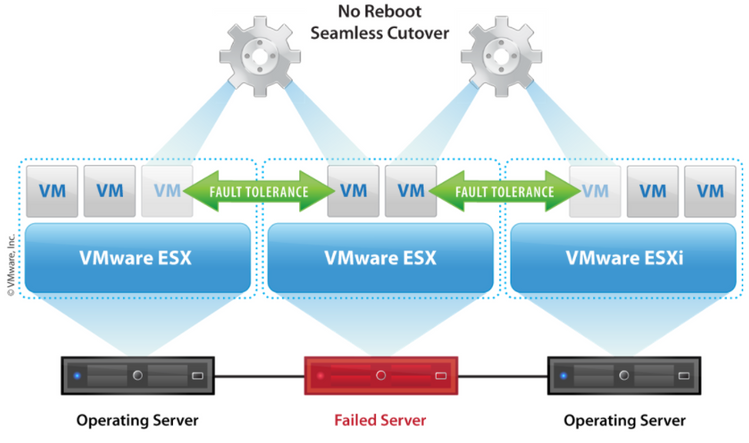 Both the active-active and active-passive solutions are mostly used within the context of one physical locations. This is related to the infrastructure requirements these solutions need to operate. When this single location "burns down", the environment cannot be easily restored. By replicating the state of the virtual machines to another location, services can easily be restored with limited downtime.

The image below shows the VMware concept. VMware ESX represents the hypervisor in this image. Microsoft offers similar functionality in Hyper-v. 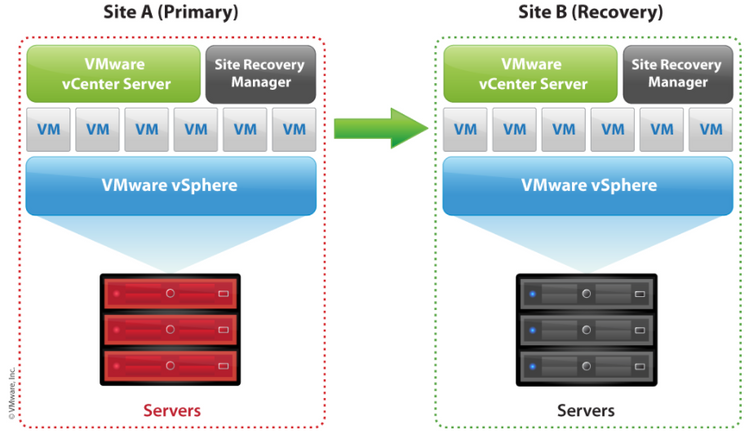 As mentioned before, most virtualization environments offer an additional management layer. This management layer does not only offer an increased system availability, but also decreases the system maintenance, especially in larger environments. The management layer is able to offer unified interface towards the physical servers and virtual servers. This makes enables system administrators to automate management tasks, such as the deployment of new servers. It also enables them to execute maintenance on physical systems without any downtime. These are just a few examples of management benefits.

The image below shows the VMware concept. VMware ESX represents the hypervisor in this image. Microsoft offers similar functionality in Hyper-v. 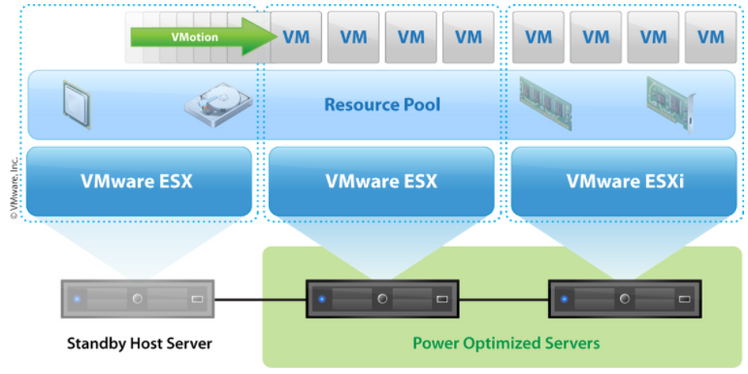 Virtualization is at its peak, and at this moment still dominated by VMware. Microsoft is catching up, while other nice players are focussing on offering solutions for specific market segments. One example is area Stratus, a company which prevents critical business applications from failing. All of these systems are focussed on on-premise (or private-cloud) environments. At the same time Microsoft (Azure), Amazon (Amazon Web Services) and VMware (vCloud) are growing their public cloud offering. Due to the nature of safety and security systems, this document focusses on the on-premise products offerings of these vendors.

Stratus offers Everrun, a solution which focusses on preventing downtime for applications running on the platform.

Xenserver is another open-source virtualization solution, maintained by the open-source community.

Virtualization in the security industry

As most security environments are still disconnected from the IT environment, the security industry mainly used the virtualization concept to increase the reliability of the software used in such environments.

Virtualization products are complex and offer a lot of functionality. Professional training on such a product can easily take a full week. In order to meet and exceed the expectations of its customers Bosch recommends its system installers to outsource the design, set-up and maintenance of such an environment. Alternatively the system installer can apply for local training on the specific platform, or contact the vendor of the platform directly for support. For example, Stratus offers professional services, which includes consulting services.

For the open-source products loads of information is available on-line. The learning-curve of such solutions is mostly a bit higher, compared to their commercial counterparts.