How to configure Traffic Detector on Bosch cameras (firmware 8.10) and how does it work?

Traffic detector has been developed to cope with all traffic densities up to high density like congestions and queues in front of traffic lights. It also detects non-moving vehicles and is thus applicable for smart parking. In addition to vehicles, it also detects pedestrians.

Traffic Detector is available on the following cameras:

To separate vehicles in high traffic, or to detect parked vehicles, machine learning is needed. Camera Trainer was Bosch's initial solution for these applications. Camera Trainer’s low processing power requirements made it ideal for use on Bosch IP cameras based on the CPP6, 7 and 7.3 common product platforms. However, Camera Trainer was limited to a short distance and needed to be trained by the user for every scene, resulting in high training effort. (The advantage of Camera Trainer is that any kind of rigid object can be trained. For more information please refer to the Camera Trainer Tech Note.) 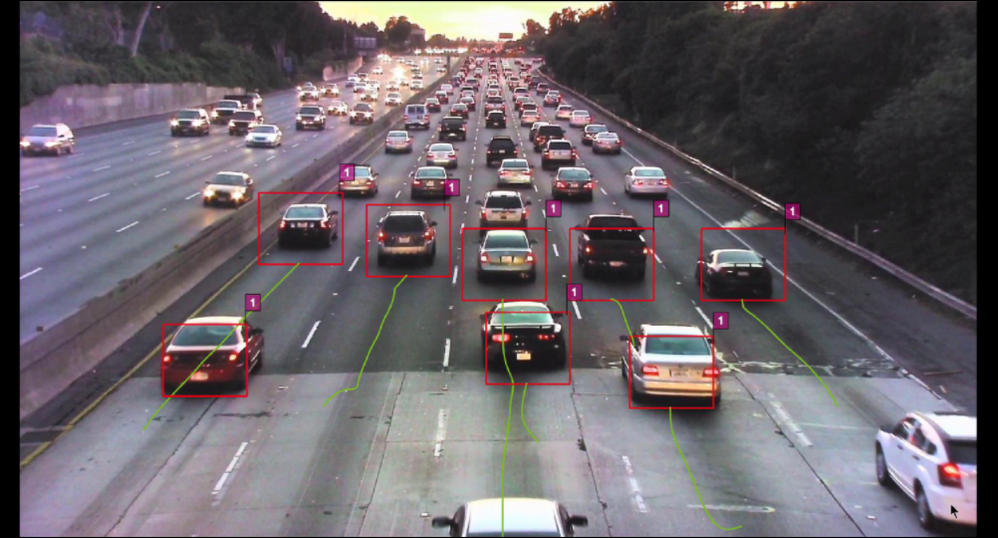 Traffic Detector is a pre-trained vehicle and person detector which also supports greater detection distances than Camera Trainer, though less than Intelligent Video Analytics. It separates persons, bikes, cars, trucks and busses even in dense congestion or traffic queues. Another benefit of traffic detector is that it is robust with regards to shadows or headlight beams. 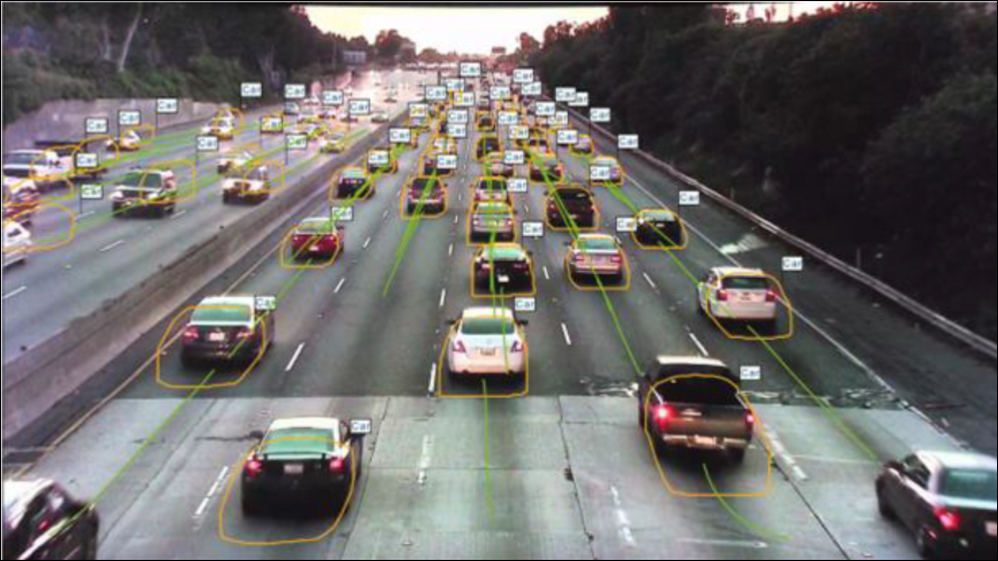 No. It will extend the possible applications. Current intrusion detection has to cope with long detection distances, correspondingly few pixels on the target object, a wide variety of poses (walking, running, crawling, rolling) and needs to be able to deal with the unexpected. It can run on very low processing power. It is targeted towards moving objects, and will ignore all stationary ones.
Machine learning, on the other hand, needs high resolution and will thus only work in near range. It also needs high processing power, which is one of the main reasons adoption is not more widespread yet. Furthermore, it can only detect trained and expected objects. But with machine learning, objects can be properly classified, and close objects can be separated well. Non-moving objects can still be detected, even after a very long time without motion. Therefore machine learning in general is a good technology for applications like parking lot occupancy, traffic monitoring, as well as for counting people without false counts from shopping carts or baggage.
Furthermore, a detector itself only detects an object in a single frame. For most application, on the other hand, the movement of the object over time is even more important, and a tracker is typically needed to combine the single detections, add robustness, and extract information like location, speed and direction. The best solutions arise when knowledge from several sources is combined, like detectors, trackers, optical flow, perspective information and more.

Activation of the Traffic Detector is available in VCA->Metadata Generation->Tracking Mode via 2D Traffic or 3D Traffic. Note that Camera Trainer will automatically be disabled when Traffic Detector is enabled and vice versa. Traffic Detector objects behave as all other video analytics objects, and the usual alarm and counting rules can be applied. 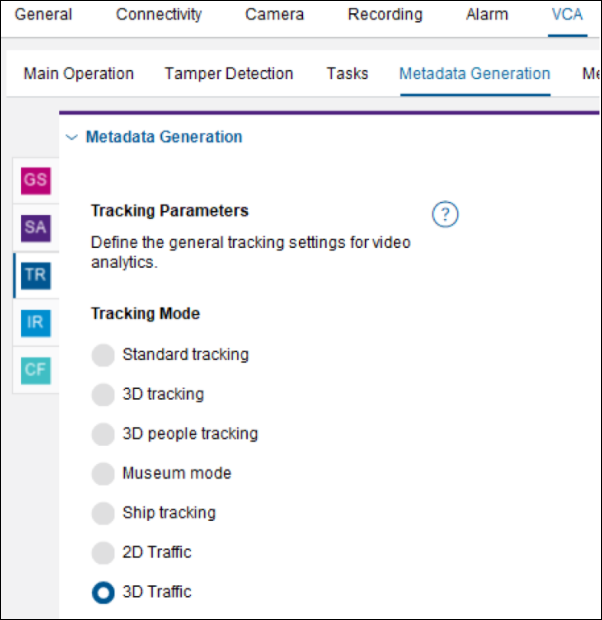 2D Traffic is the choice for static applications like parking lot occupancy. A simple tracker combines the detector output over time, and objects need to overlap for 50% in two consecutive frames to be tracked properly. Thus, fast objects crossing the field of view may not be tracked properly.
- Only bounding boxes will be outputted.
- No color, speed, geolocation, nor direction filter
- No idle/removed object detection

3D Traffic is the choice whenever speed, map location / geolocation, and best tracking performance are needed. It requires the camera to be calibrated properly in order to understand the perspective in the scene and convert pixel into real-world size, speed and location. Once an object has been detected with the traffic detector, the tracker learns the appearance of the object and is able to follow it on its own.
- Bounding boxes for static objects, closer fitting shapes for moving objects
- Color, speed, geolocation, direction available
- Idle/Removed Object: only Stopped Object detection

Right: Once an object starts moving in 3D Traffic mode, the outline switches to a flexible shape. Visualization will switch back to bounding box only for cars, busses and trucks, once the objects stops long enough and is considered parking. Use VCA->MetadataGeneration->Idle/Removed->Stopped Object Debounce Time to determine when vehicles will switch to static objects handling.

Recommendation: Set this longer than typical traffic light red phase in case of intersections. For persons and bikes, tracking will stop completely after this time.