What should you know about SNMP and Bosch cameras SNMP support?

What should you know about SNMP and Bosch cameras SNMP support?

Simple Network Management Protocol (SNMP) is a common protocol to monitor the health status of a system. Such a monitoring system typically has a central management server that collect all the data from the system’s compatible components and devices. SNMP provides two methods to gain the system health status:

SNMP also allows configuration of some variables inside devices and components. The information, which messages a device supports and which traps it can send, is derived from the Management Information Base, the so-called MIB file, a file that is delivered with a product for easy integration into a network monitoring system. There are three different version of the SNMP protocol:

SNMP version 1 (SNMPv1) is the initial implementation of the SNMP protocol. It is widely used and has become the de facto standard protocol for network management and monitoring. But SNMPv1 has become under threat due to its lack of security features. It only uses ‘community strings’ as a kind of passwords, which are transmitted in clear text.Thus, SNMPv1 shall only be used when it can be assured that the network is physically protected against unauthorized access.

SNMP version 2 (SNMPv2) included improvements in security and confidentiality, amongst others, and introduced a bulk request to retrieve large amounts of data in a single request. However, its security approach was considered way too complex,hindering its acceptance. Thus, it was soon pushed out by version SNMPv2c, which equals SNMPv2 but without its controversial security model, reverting to the community-based method from SNMPv1instead, similarly lacking security.

SNMP version 3 (SNMPv3) mainly adds security and remote configuration enhancements. These include improvements on confidentiality by encryption of packets, message integrity and authentication. It also addresses large-scale deployment of SNMP.

A management information base (MIB) is a formal description of a set of network objects that can be managed using the Simple Network Management Protocol (SNMP). MIB-I refers to the initial MIB definition and MIB-II refers to the current definition.

Standard MIB objects are designed for a wide variety of technologies and network devices. These MIB objects cover a large range of performance monitoring parameters that are valid for any network device in general.

To check what SNMP version does a particular camera support, check the data sheet of the device. (Find it under your device in the product catalogue - https://www.boschsecurity.com/xc/en/product-catalog/)

Structure of the MIB (bvip_snmp.mib) 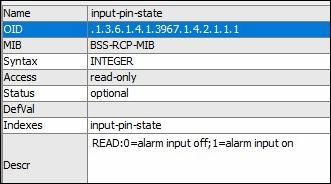