How to determine the Video Streaming Gateway (VSG) throughput and performance?

Bosch Video Streaming Gateway (VSG) is a separate “Sub-Service” of VRM that can run independently, or in conjuction with VRM. VSG acts as an iSCSI NVR for non iSCSI capable devices.

The base functional capabilities of VSG are as follows:

When designing a system, all of these factors must be considered in order to build a cleanly-functioning system.

1. When using a standalone server, the VSG throughput will vary based on the hardware platform itself:

o This includes both the RTSP pull from cameras, as well as the iSCSI push to the storage target

The new Generation 10 Server can supply 3000 Mb/s of throughput:

2. The second part of the equation is the available throughput of the iSCSI target.

Bandwidth calculation for a single camera would be 9 Mb/s. 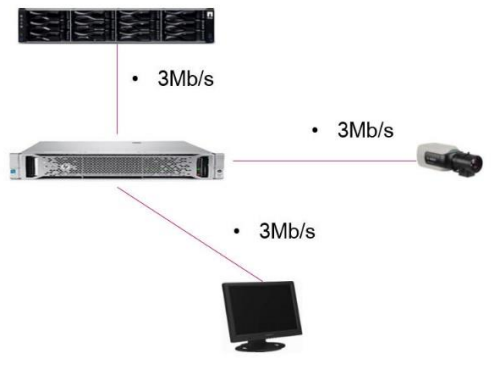 A 100 camera system would be calculated at a theoretical worst case scenario 900 Mb/s:

VSG and Recording appliances are a unique situation:

Based on RAID 5 configuration:

⚠️ When utilizing a Recording Appliance with VSG, throughput will be slightly lower. The VRM numbers are based on individual cameras performing and iSCSI "Push". VSG is performing a "Pull" to bring the video into the system.